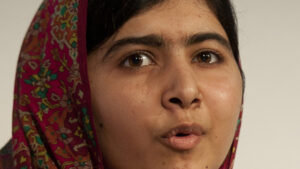 Pakistani Nobel laureate Malala Yousafzai has criticised Nigerian and world leaders for failing to help free 219 schoolgirls kidnapped a year ago by Boko Haram fighters. Pakistani Nobel laureate Malala Yousafzai, who rose to international fame after being shot by the Taliban for campaigning for girls’ rights to education, made critical comments against Nigerian and world leaders on the eve of the first anniversary of the schoolgirls’ abduction. “In my opinion, Nigerian leaders and the international community have not done enough to help you,” she said in a letter to the teenagers. “They must do much more to help secure your release. I am among many people pressuring them to make sure you are freed,” she added, calling the girls – kidnapped on April 14 last year in the northeastern town of Chibok – “my brave sisters”. Malala’s letter, which she said was “a message of solidarity love and hope”, comes as events, including marches, prayers and vigils, were being held to mark the girls’ 12 months in captivity. Schools destroyed The United Nations Children’s Fund (UNICEF) on Monday said that 800 000 of the 1.5-million people displaced by Boko Haram violence were children. More than 300 schools have been severely damaged or destroyed between January 2012 and December last year, with at least 196 teachers and 314 schoolchildren killed in that period, it added. “Children have become deliberate targets, often subject to extreme violence – from sexual abuse and forced marriage to kidnappings and brutal killings,” it said in a report, “Missing Childhoods”. Children had also become weapons of war, being forced to fight alongside the fighters and also used as human bombs, it added. Boko Haram – which launched a rebellion in 2009 – kidnapped 276 girls from their school in Chibok, in Borno state.   Fifty-seven managed to escape soon afterwards but the remainder have not been seen since an appearance in a Boko Haram video in May last year. Abubakar Shekau, the group’s leader, has claimed they have all converted to Islam and been “married off”. Boko Haram opposes Western education and has sought to impose Islamic law in all 36 states of Nigeria, which is roughly equally divided between a predominantly Muslim north and a mainly Christian south. The group operates mainly in the northeastern Nigerian states of Adamawa, Borno and Yobe, where the government has declared a state of emergency since May 2013. ‘Reasons for hope’ Nigeria’s President Goodluck Jonathan and his government were heavily criticised for their response to the kidnapping but Malala said there were now “reasons for hope and optimism”. “Nigerian forces are re-gaining territory and protecting more schools,” she wrote. “Nigeria’s newly elected president, Muhammadu Buhari, has vowed to make securing your freedom a top priority and promised his government will not tolerate violence against women and girls.” Malala, 17, also wrote of her own experiences at the hands of Taliban in her native Pakistan. She was shot and nearly killed by the armed group in October 2012 for insisting that girls had a right to an education.   *Source M & G]]>