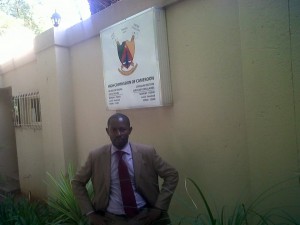 Solomon Amabo infront of Cameroon High Commission office in South Africa[/caption] South Africans see attacks on foreigners as one of the best ways to express their frustrations to their government says Solomon Amabo who was among the numerous African victims of xenophobia in Mandela’s country. A Journalist from Cameroon, Amabo and others were lucky to escape when his home in Jeppestown,Johannesbourg, was stormed by irate South Africans seeking to send foreigners packing. Amabo says he has not previously had any issues with South Africans . “Foreigners look for capital and create their own jobs,” says Amabo in debunking claims that jobs meant for South Africans are taken by foreigners. Amabo also expressed concerns on the poor response of the Cameroon government to plight of his compatriots caught in the crossfire of the attacks. In an incident which took place after the interview, the fears of Amabo were justified when a meeting he had with the Cameroon High Commissioner to South Africa to address the plight of Cameroonians went ugly. Can you shed more light on the attack you suffered recently in South Africa, how did this happen? I was home (351 Hans and Fox Street, Jeppestown Johannesburg, South Africa) It was about 10 pm on 17 April 2015.  With the attack on foreigners, everybody is always on alert. At that 10 pm, I prayed and read Psalm 91 and was about to sleep. I heard a group of people singing not far from my home. Five minutes later I started hearing how my door was being hit. I immediately knew our compound was under attack. First reaction was to call some compatriots notably Comrade Milton Taka of the Social Democratic Front,SDF(an opposition party in Cameroon) and then screamed to wake up all the neighbours. ‘We are going to kill you. Open the door.’ Kwere were’ (foreigners). All of you must leave South Africa,” I heard the voices saying Bang, bang, my first iron door pulled off apparently I thought. ‘Why do you want to kill me? We can negotiate. We are brothers; we are Africans,’ I said, as I started broking through my window in a bid to escape. ‘Bang, bang,’ they continued hitting the second door which I had now blocked with my bed. Things were going too fast. [caption id="attachment_17715" align="alignright" width="180"] 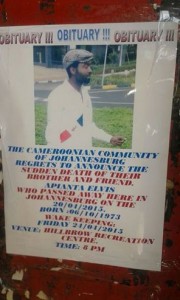 Elvis Apianga from Cameroon was one of those who died from the xenophobic attacks in Johanesburg ,South Africa[/caption] With everyone on alert, the police were called in by neighbors. Before they could finally break the second iron door and get to me, I, and with the assistance of neighbours had broken the window and escaped to safety. As I escaped they shot me with stones. (See destroyed window). More than 8 of us all tenants living in the compound had moved on to the roof of the building. We were preparing to start firing stones we had prepared against the group of about ten persons who attacked our compound with cutlasses, sticks and other weapons. In less than 6 minutes, two cars from the South-African Police Service (SAPS) whom I keep thanking for their prompt response! The Police then ferried me and some other neighbors to the Jeppestown police station where we spent the night. While there, I met more than 20 other foreign nationals and some security guards who had abandoned their duty post to seek refuge at the police station. I heard that other houses were looted same night within that neighborhood. At dawn on April 18, policemen accompanied me to my house. I could not find some R2700, my TV set my laptop and other items which I think would be known after. My home was ransacked. I returned to the JeppesTown Police Station where I opened a case of robbery against x.  It is only later in the evening that I discovered that I had bruises on my arms in the course of my escape. From the police station, some benevolent friend thereafter took me to his for safety. . What was the reaction of South Africans who live in the same building as you, where there accomplices to the attack or there was some sympathy from them? They showed sympathy. But the building is inhabited by Kenyans, Malawians Mozambicans etc. everybody is scared because any foreigner can be attacked. Some of them are the ones who called the police while the attack on my house was ongoing. Prior to the attack have you had any conflicts with South Africans or what is it you did as a person that will prompt such an attack on you? I do not have any problem with any South Africa. This is a country that you learn to avoid argument with anyone for fear of being killed. After my house other houses were attacked and looted. How prompt was the response of the police when you called and what measures have been taken to beef up security where you live? [caption id="attachment_17716" align="alignleft" width="300"] 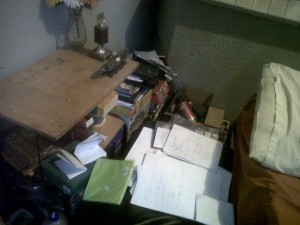 Amabo’s apartment was ransacked[/caption] The police were very prompt as explained above,. They are working 24/7. when we were at the police post, the kept being deployed once the get report of an area being attacked. Many of them have been deployed in Jeppestown where I lived. Today April 21, Defence Minister Nosviwe Mapisa announced the deployment of hot spots of xenophobia in the country. How did this wave of xenophobia start and did the journalist you are see this coming? SA has been like that. There was xenophobia in 2008 and 2009. To be clear from time to time this would occur because it seems the best way for SA to express their problems to govt is to attack foreigners. This year it started when the Zulu King Zwelitini Goodwill accused foreigners of owning much businesses, depriving nationals. The speech was unexpected and I learnt that he was angry at the fact that some black foreign nationals had robbed him in a diamond deal. I don’t think this is the last because the country is generally insecure. Many civilians carry illegal weapons. I wish to think these are weapons used to end apartheid. Eminent personalities like former President Mbeki say the xenophobia is perpetrated by a small minority , is that really the case considering the scale of the violence and gory images that are floating around ? He can be right to an extent because so far only two provinces, Gauteng and Kzazulu Natal- Durban have witnessed Xenophobia. Besides not all south Africans support xenophobia. What appraisal do you make of President Zuma’s response, how helpful has it been in dousing the flames and tension? Zuma has tried as he could to deploy first some 350 soldiers to check illegal immigration. He has been on media, parliament and even met the victims to try stop it. He has finally heeded calls to deploy troops. He has done what I think he could, but I think he should try to get people documented to avoid discontent. This is not the first time such attacks are taking place, is South Africa moving towards black on black apartheid? [caption id="attachment_17719" align="alignright" width="300"] 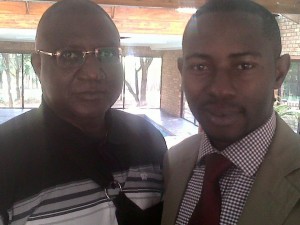 With Djeukam Tchameni of the Cap Liberte fame, Amabo has become the most visible voice articulating the plight of Cameroonians affected by the attacks in South Africa[/caption] I don’t think that we are moving towards apartheid. The foreign community is already too many. You Can understand the situation if you note that SA were deprived of education for more than 40 years. The people see violence like only solution and death as nothing. Gradually the people are being educated and things are changing. It would take time. Maybe one or two generations of at least 40 years each. Some have explained the xenophobia on economic grounds, from your observations, are foreigners actually taking jobs that South Africans should be doing? What jobs are we talking about here? Foreigners look for capital and create their own jobs because most of them do not have required stay documents. How can SA be fighting over cleaning jobs? The issue is that it is believed that with the grants the government give per child, old age grants, free houses they don’t want to work and accuse foreigners.  Where are the jobs? Its really difficult even if you are qualified. SA need to get training educated to be able to take over foreign expertise. It would come though with time. We have heard of several governments taking measures evacuate your citizens, are there any plans the Cameroon government is making offer the help its nationals may need? The Embassy has remained silent and do not pick even phone calls or respond to email. I will have to storm the embassy before Friday. We have victims and those who want to go home. Can the embassy assist. That is what we should know.]]>