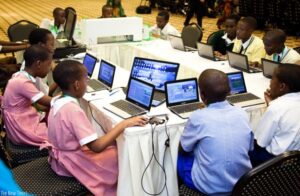 Primary school pupils using computers. (File)[/caption] The 2015 World Economic Forum’s Global Information Technology report was released this week, with Rwanda topping the world in the cluster ‘Government success in ICT promotion.’ Indeed, the government has invested heavily in building IT infrastructure and is encouraging both private and public enterprises to tap into the potential of technology to improve the welfare of Rwandans and help accelerate the country’s development. But are the players doing enough to transform people’s lives? According to the Clement Uwajeneza, the chief executive of Rwanda Online Platform Limited, there has been impact, but it is not yet adequate, “With heavy investments in ICT infrastructure, we are witnessing a change in people’s lives,” Uwajeneza says. “However, we still need to do more.” Rwanda Online is a platform currently under construction and, upon completion, it is expected to serve as the central station for delivery of government services. The platform is expected to offer more than 100 services. “Lately, we are seeing an increasing trend in the use of online services, but there is still lack of understanding of the potential of ICT businesses,” Uwajeneza added. Under the cluster of ‘Government success in ICT promotion’, Rwanda is followed by United Arab Emirates, Singapore, Luxembourg and Qatar while the next African country is Kenya ranked number 21. The WEF report assessed 143 countries based on their capacities in information and communication technology sectors. The classification is based on 52 individual indicators categorised under 10 different clusters, including political and regulatory environment, business and innovation, infrastructure, affordability, skills, individual usage, business usage, government usage, as well as economic and social impacts. On the extent to which governments have a clear implementation plan for utilising ICTs to improve their overall competitiveness, the report placed Rwanda fourth after United Arab Emirates, Singapore and Qatar. The power of ICT The particular assessment is under the pillar of importance of ICTs to government vision of the future, which addresses the level of services delivered to the public. Jean Paul Uwayezu, a marketing consultant with the Service Mag, said ICT has enhanced service delivery through the ability it gives ordinary people to demand feedback from public offices, that were traditionally known for delays. “The beauty of technology today is that you don’t need to go through a lot of bureaucracy to get a feedback from public offices; some officials have made it easier to the extent that they respond to queries on social media directly… we, however, need to sensitise the public so that they exploit these initiatives,” said Uwayezu. The report assessed how ICTs enable all citizens to access basic services, including health, education, and financial services, among others. Globally, Rwanda was ranked 20, but topped the continent. ‘More to be done’ One of the projects that are designed to help deliver quality education in Rwanda is the One Laptop Per Child (OLPC) . The project director, Eric N. Kimenyi, says the gadgets have not only increased the interest of learners and their teachers, but also enabled remote schools get access to quality content. “After training teachers in OLPC, we built in content related to the subjects children study. This has given impressive results; this time it’s not just about programming, the computers are facilitating in class work which has made children more innovative and creative with the machines,” Kimenyi said. “We have witnessed an increase in class attendance and also a high demand among children to go to schools. We are drawing an ICT in Education Master Plan, which, when completed, will give us a clear parameter to measure the impact of such initiatives.” Didier Nkurikiyimfura, the director-general of ICT in the Ministry of Youth and ICT, said there is still a lot more to be done if Rwanda is to sustain and build on the achievements registered so far. “The report is a good sign of recognition of our efforts in advancing IT in the country although we are still faced with challenges. We emerged the best in one sub-index out of 14 which gives us a reason to strategise on how we can perform better in other sub-indexes,” Nkurikiyimfura said. One area that Rwanda did not feature prominently in the report is the private sector and individual usage of ICT. But Nkurikiyimfura said the reason could be that it is too soon to measure the impact in these two areas. “Private sector investment in ICT is impressive, we are still on the right path and soon the results will be felt. An example, 45 per cent of Foreign Direct Investments in the past five years were directed to the ICT sector, the 4G LTE project attracted investments worth $140 million in one year, yet we are supposed to measure the final attraction in two years, so we are on track,” he said. *Source NewTimes ]]>