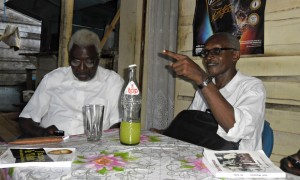 Enoh Meyomesse, right, after his release from Kondengui Central Prison in Yaoundé, Cameroon. Photograph: Pen International[/caption] The Cameroonian poet, essayist and political activist Enoh Meyomesse has been released from prison this week after more than three years in jail. “It’s funny to see the prison from outside,” Meyomesse told the writer Patrice Nganang, who campaigned for his release. “They practically threw me outside. It was quite forceful. But if it is kicking me outside to freedom, then there’s nothing to complain about.” The author, who has published more than 15 books – and who unsuccessfully ran for the Cameroon presidency in October 2011, challenging Paul Biya’s 30-year rule – was arrested in the country’s capital, Yaoundé, in November 2011 and charged with armed robbery and attempting to organise a coup. According to English PEN, he was held in solitary confinement and complete darkness in Bertoua for 30 days, before being moved to Kondengui Central Prison in Yaoundé. The charges against Meyomesse – which were widely believed to be politically motivated – all subsequently crumbled in June 2012. However, the next month a judge ordered a six-month extension of his detention, and in December 2012 the writer was charged afresh, found guilty of armed robbery and the illegal sale of gold and sentenced to seven years in prison. Following years of legal appeals and lobbying by PEN, he was acquitted in April, and it was decided that the 40-month sentence for an additional charge of handling stolen goods had already been served. Meyomesse’s lawyers are now appealing to Cameroon’s supreme court in order to clear his name entirely.   In an open letter to President Biya just before his release, Meyomesse wrote: “President of the republic – once again I come to humbly request your intervention to ensure that I can finally regain my freedom. Forty months in Kondengui, you cannot know what it does to a human being. Your life stops.” The author has been a major focus for the Writers at Risk programme at English PEN, with supporters sending him books and writing material, lobbying authorities and publishing his work. In an open letter to Meyomesse, published late last year, the acclaimed Congolese author Alain Mabanckou wrote: “We will never cease to speak your name and to denounce, from every rooftop of the world, the injustice that befell you and the contempt shown by the justice system towards you.” While incarcerated, Meyomesse sent a message of support for the campaign to allow UK prisoners to receive booksduring their sentences, saying “like oxygen, they cannot be replaced”. “I am one of the many people who has benefited from the books sent to prisoners all over the world by English PEN,” he wrote. “They have brought me an irreplaceable joy and huge moral support whilst in Kondengui prison. They have proven to me that, while my biological family has abandoned me, there exists another family – perhaps even more important – a literary family, a family of novelists and poets like me, which is always beside me and will never abandon me.” English PEN’s Cat Lucas said the organisation was “overjoyed” that Meyomesse had finally been released from prison. Tamsin Mitchell, Africa researcher at PEN International’s writers in prison committee, said the campaigners would “continue to support Enoh to recover his health, which has suffered as a result of more than three years’ imprisonment in poor conditions, and in his fight to clear his name”. She also urged the Cameroonian authorities to expedite Meyomesse’s supreme court appeal and to ensure that he remained free to write. *Source The Guardian]]>