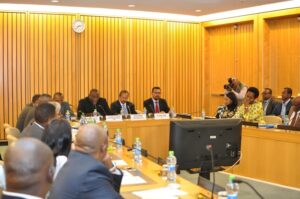 Dr. Ekow Spio-Garbrah, Minister of Trade and Industry, Ghana Mr Abdalla Hamdok, Deputy Executive Secretary, ECA and Dr. Arkebe Oqubay, Minister and Advisor to the Prime Minister of Ethiopia, during the ERA report launch at the Conference of Ministers 2015 in Addis Ababa[/caption] Industrialising through Trade”, was launched by Dr. Ekow Spio-Garbrah, Minister of Trade and Industry, Ghana and Dr. Arkebe Oqubay, Minister and Advisor to the Prime Minister of Ethiopia, during the Conference of African Ministers of Finance and Economic Development in Addis Ababa. This year’s report builds on the key messages of the previous editions of ERA and focuses on industrialisation and structural transformation. Launching the report, Dr. Spio-Garbrah commended it for its in-depth analysis and recommendations. He explained that, “Africa needs to focus on cross-border trade and it must rise up the value chain.” He called on policy makers in the Continent to translate the ERA recommendations into actions. Dr Oqubay also lauded the report and adviced “We need to focus on three issues to engage in the global market. One, improve and deepen exports. Two, ensure the domestic market is integrated. Three, be cautious on the overshooting of the service sector while manufacturing is yet low.” His sentiments were shared by Mr Abdalla Hamdok, Deputy Executive Secretary, ECA. He highlighted the importance of addressing the challenge of being stuck in bottom of the global value chain. Mr Hamdok revealed, “There is empirical evidence of bi-directional relationship between industrialization and trade. It is important to gear trade policies towards national development objectives and be selective in specific sectors as the endeavour is costly.” He also indicated that trade could reverse the course of industrialization, unless carefully designed. Experts discussed the current growth in Africa, its prospects and challenges. Mr. Adam Elhiraika, Director, Macroeconomic Policy Division, ECA, revealed some very interesting facts. He said, “Africa’s growth prospects remain positive despite strong headwinds, with increased private consumption and investment being the key drivers of growth in 2015. The current account deficit is expected to remain high owing to trade deficits and increased demand for capital goods. Stable inflation underpins Africa’s economic performance as it is expected to decline from 6.9% in 2015 to 6.7% in 2016. Private capital inflows are expected to remain strong in 2015, thanks to improved business climate and profit prospects.” However, he cautioned, “Innovative strategies to mobilize domestic and external resources are needed for Africa to bridge the domestic resource gap.” Some of the challenges that Africa faces in the mid-term are the slowdown in oil and commodity prices, slow recovery in developed countries, tighter global monetary policies, weather-related shocks, and political instability. “However, Africa’s underlying fundamentals for long-term growth remain robust. To ensure resilient economic performance through industrialization, Africa must adopt social development strategies that are consistent with the expansion of modern services and industrial sectors,” he concluded. Explaining that trade can be a tool to promote industrial development and structural transformation, Mr. Stephen Karingi, Director, Regional Integration and Trade Division, ECA said, “A successful trade-induced industrialization should be interactive and coherent with a country’s development strategy.” He added, “African firms appear to be increasingly connecting to global value chains, but are mainly confined to the lower-end activities with limited domestic value addition. The scope for global value chains to support structural transformation is, hence, largely untapped, particularly for what pertains to regional value chains and intra-African trade.” In conclusion, Dr Oqubay said, “In regard to achieving structural transformation, financing for development is critical. For specific examples you can look at the Ethiopia’s current experience (especially the practice of Development Bank of Ethiopia).” He concluded by suggesting the formation of an alliance to stand against the unfair world trade order and renegotiate. Established by the Economic and Social Council (ECOSOC) of the United Nations (UN) in 1958 as one of the UN’s five regional commissions, ECA’s mandate is to promote the economic and social development of its member States, foster intra-regional integration, and promote international cooperation for Africa’s development. *AMA]]>