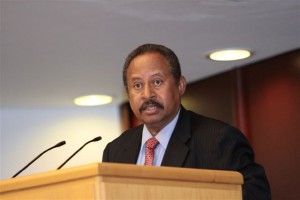 Dr Abdalla Hamdock, ECA Deputy Executive Secretary[/caption] The ECA Country Profiles – set to become key data and forecasting tools for Africa – were launched at the 8th Joint Annual Meetings of the African Union Specialised Technical Committee on Finance, Monetary Affairs, Economic Planning and Integration and the ECA Conference of African Ministers of Finance, Planning and Economic Development in Addis Ababa. Five pilot profiles were presented, covering Botswana, Cameroon, Kenya, Morocco and Nigeria. These reports will help countries to focus their energies on macro-economic and social policies that will help them achieve structural transformation in Africa. The profiles provide a diversity of stakeholders, including governments, investors, partners, academics, analysts and civil society representatives, with a high quality, alternative source of data. Speaking at the launch, ECA Deputy Executive Secretary Mr Abdalla Hamdock, said, “Africa must be in position to tell its own story, but it won’t be able to do so if it doesn’t have the relevant data to tell this story. The ECA country profiles will assist member states to take control of their own narratives. This also places them in a better position to take evidence-based decisions.” Tailored to the needs of African countries The ECA Country Profiles will make it possible to evaluate the macroeconomic and social performances and potential risks facing African countries on a regular basis. They also provide high level practical and strategic recommendations. The reports will be produced in partnership with various African national authorities, including central banks, statistics authorities and research centres. Ms Karima Bounemra Ben Soltane, Director of the ECA North Africa Office, said, “We consider Country Profiles as a major contribution to the Data Revolution. Unlike other Country Profiles, the information provided in the ECA documents is not a static series of country overviews, but rather a development analysis, conducted in interaction with member states.” As a unique product specifically tailored to the needs of African countries, the ECA Country Profiles cover themes such as employment, natural resources, agriculture, climate change and the green economy, and focus on national and regional priorities such as Agenda 2063 and the Continental Free Trade Area. Other key characteristics include the inclusion of the ECA indexes that were launched as part of the Data Revolution Workshop, such as the African Social Development Index, the African Gender Index and the Regional Integration Index. A powerful tool to put Africa first While country profiles can become powerful tools for the promotion of national and African growth, their success will depend on the support of each country. “We support the African narrative, and in doing it well. Our facts and figures will prove this message: these will not be ordinary country profiles, they will always put Africa first”, explained Mr Antonio Pedro, Director of the ECA Office for East Africa. Mr Pedro stressed, however, that securing reliable data across the continent is not always easy. “This tool is needed all the more, since sustaining Africa’s current impressive growth will require continuous vigilance and assertiveness through elements such as the Country Profiles we are launching today”, concluded, Mr Hamdock. ECA regional directors for West, Central and Austral Africa, Dimitri Sanga, Emile Adohe and Said Adejumobi also attended the launch. Other key points discussed at the event included the ECA’s plans to give priority to national data, the role of country profiles in supporting structural transformation and increasing data collection capacity in member countries. *Source AMA]]>