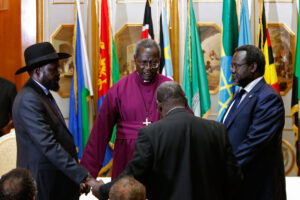 South Sudan’s rebel leader Riek Machar (R) and South Sudan’s President Salva Kiir ([/caption] Twenty church leaders and representatives from South Sudan and Ethiopia met along with related agencies for two days to reflect on the tragic situation of conflict in South Sudan, now in its sixteenth month, the recent collapse of peace talks among the parties to the conflict, and fresh ways forward. “The Church now undertakes to begin a peace process to address the mistrust of the parties and to bring them together to discuss the needs of the people and the future of the nation in a forum which is less polarized and less politically charged than other processes,” promised the church leaders in their communiqué, issued in Addis Ababa on 15 April. Taking note of the Easter season’s promise of new life and resurrection, the statement chided the conflicting parties for a senseless conflict and pledged a broad-reaching advocacy effort with all segments of society in South Sudan. “The people of South Sudan continue to suffer,” the statement continued. “The trauma of decades of conflict is being reinforced rather than healed. The rule of law is largely absent. In many parts of the country there is virtual anarchy, with no effective government. The culture of revenge reigns supreme, and the longer the war continues, the more deeply this culture will be ingrained. There is insecurity and fear; people panic at the smallest alarm. Tribalism is on the increase. Fighting and forced recruitment continue.” “It’s urgent to bring just peace to South Sudan. People are suffering,” said the WCC general secretary Rev. Dr Olav Fykse Tveit in his opening remarks to consultation participants, noting, “the church leaders are playing a significant role to bring peace to South Sudan.” Tveit continued, “The WCC has accompanied the churches in South Sudan for more than 40 years. We are gathered here to reflect on how God could lead your people to justice and peace. We have a very solid role to play as peace makers. The churches are representing the people and the civil society and could unite the country. ” Rev. Peter Gai Lual, head of the Presbyterian Church from Malakal and chair of the South Sudan Council of Churches (SSCC), said; “We, the church leaders, have consistently stated that there is no moral justification and no excuse to continue fighting and killing. The fighting must stop immediately, and only then can these political matters be discussed in a meaningful way. We are ambassadors for peace and mandated by God to reconcile.” “Peace must be sustained and it must be peace with justice. We are coming as people of faith and carrying a big hope to the world. We are pilgrims and we have to work, walk and pray together, ” said Dr Agnes Abuom, moderator of the WCC Central Committee. The delegations were welcomed and hosted by Patriarch Abune Matthias of the Ethiopian Orthodox Tewahedo Church, Archbishop of Axum and Echegue of the See of St Teklehaimanot; Abune Berhaneyesus, Cardinal of the Ethiopian Catholic Church; and Rev. Dr Wakseyoum Idosa, President of the Ethiopian Evangelical Church Mekaneyesus. The meeting was also addressed by Ambassador Seyoum Mesfin, chair of the East African Intergovernmental Authority on Development (IGAD) special envoys. The South Sudanese delegation also met with Ethiopian Prime Minister Hailemariam Desalegn. The WCC will call for a special day of prayer for the South Sudan Peace Process in May.   *Source WCC/APO]]>