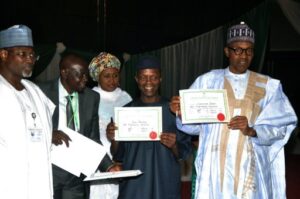 President-elect Buhari and VP elect, Osinbajo, display certificate of return.[/caption] Millions of dollars in contracts held by U.S. strategists could be in jeopardy after the victory of General Muhammadu  Buhari  in last Saturday’s presidential election. The change in leadership could be trouble for at least four U.S. firms with lucrative arrangements from the  outgoing Jonathan administration . Levick, Squire Patton Boggs, Mercury and Weber Shandwick each have contracts worth a minimum of six figures per year with the Nigerian government. “It’s not unusual for governments — whether foreign governments or even U.S. state or territorial governments — to switch lobbying firms after an election because the new government wants to have its own loyal troops in the field,” said Robert Kelner, the chairman of law and lobby firm Covington & Burling’s election and political law practice. In total, the country spent about $4.41 million on lobbying and PR last year from U.S. firms, according to a review of forms filed with the Department of Justice (DOJ) under the Foreign Agent Registration Act. The most recent contract — inked with Levick last June — resulted in more than $1.64 million in payments during the last six months of 2014, according to filings with the DOJ. The firm was retained, in part, to help improve Jonathan’s image and combat the notion that he was not doing enough to find and rescue schoolgirls kidnapped by Boko Haram terrorists. Levick also subcontracted with Jared Genser, a human rights lawyer who has primarily represented political prisoners, to help advise the government about making “real change” in the country ahead of the important elections this month. The firm declined to comment for this story. Mercury, which has worked with the Nigerian government since 2013, had been hired to “enhance bilateral diplomatic, economic, and security relations between the U.S. and Nigeria,” according to disclosure forms. Last year, the firm earned $975,165 from the contract, which includes work by former Rep. Vin Weber (R-Minn.). It said it would arrange meetings with members of Congress and the Obama administration about Nigeria and with Nigerian officials and “business and thought leaders.” Mercury did not respond to a request for comment. Kenneth Gross, who leads the political law practice at Skadden, Arps, Slate, Meagher& Flom, said that a regime change doesn’t necessarily mean doom for firms that have contracts with Nigeria. “If they have the appropriate connections with the U.S. government, they may well stay on,” he said, adding that a power shift “could present some new opportunities” for other firms to jump in on the action. Weber Shandwick was contracted to do public relations work for Nigeria in the United States and the United Kingdom, including creating and maintaining a website to promote Nigeria’s Transformation Agenda. It was given a $617,000 budget for its services and subcontracted some work to another D.C. lobby firm, Cassidy & Associates. “We have not yet had any discussion with our client in Nigeria, the National Orientation Agency, on the status of our work on their behalf,” a spokeswoman for Weber Shandwick told The Hill in an email. Squire Patton Boggs, which boasts a deep bench of former officials, made more than $1.17 million representing the Office of National Security Advisor of Nigeria. In the past, the firm had represented the government more broadly. The contract, signed in 2013, asked for a $3 million budget per year to “advise the [client] on security and defense issues,” according to documents. Last year, it sent letters and emails to State Department officials and Senate offices regarding bilateral relations, Boko Haram and a U.S. visit from the client. *Source The Hill]]>