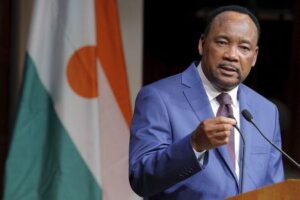 Issoufou Mahamadou, President of Niger, answers a question from a student in the audience following a speech at the John F. Kennedy School of Government at Harvard University in Cambridge, Massachusetts April 3, 2015. REUTERS/Brian Snyder[/caption]

CAMBRIDGE, Mass. (Reuters) – Militant group Boko Haram is “the worst enemy of Islam” and will be defeated because West African Muslims reject its violent actions and harsh interpretation of the Koran, Niger’s President Mahamadou Issoufou said on Friday.

“There is nothing Islamic about Boko Haram,” Issoufou told students and faculty at the Harvard Institute of Politics John F. Kennedy Forum in Cambridge, Massachusetts, during a trip to the United States.

“Abducting and raping women, killing innocent people, drinking human blood … these are not the most efficient ways of spreading Islam,” he said. “Boko Haram has no future, Boko Haram will be defeated, God willing.”

Niger is taking part in a regional operation against Boko Haram in northern Nigeria, a militant group which has launched repeated bloody attacks and abductions in Nigeria and an increasing number of raids into neighbouring countries. The military alliance includes troops from West African countries Nigeria, Niger, Cameroon, Chad and Benin.

Issoufou said Niger’s mostly Muslim population broadly supported the alliance, which he said had notched recent successes fighting Boko Haram, and rejected Boko Haram’s attempts to carve out its own state in the border region.

Niger, which is also stepping up security against traffickers and jihadi groups bolstered by weapons and fighters from Libya’s conflict to the north, is ranked at the bottom of the U.N. Human Development Index for 2013. 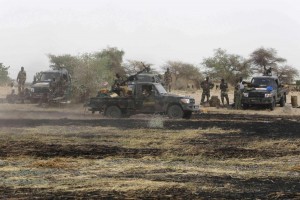 Issoufou said he saw poverty as an important reason some people join militant ranks, but he said efforts to combat it have been hindered by fluctuations in donor support, rapid population growth and climate shocks.

He said he had held meetings with the International Monetary Fund and the World Bank during his trip to discuss financing.

Issoufou touts advances in transparency and press freedoms since coming to power, and is expected to seek re-election in mid-2016.