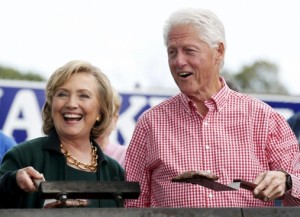 Former US Secretary of State Hillary Clinton and her husband former US President Bill Clinton. The former President and his daughter Chelsea are set to tour Kenya. (Photo:Reuters)[/caption]

NAIROBI: Former United States President Bill Clinton is expected in the country on ThursdayMr Clinton’s itinerary will include a tour of projects funded by the Clinton Foundation and the Clinton Global Initiative. According to officials, Clinton will be accompanied by his daughter Chelsea.

They will also visit a women’s education centre under a programme known as Solar Systems Programme. Meanwhile, two armoured limousines US President Barack Obama will use during his July visit to Kenya have arrived in the country. The two Cadillacs are similar, but the one that usually carries the President is popularly known as ‘The Beast’. President Obama’s limousines arrived at Jomo Kenyatta International Airport almost two weeks ago before they were driven to the US Embassy.

Foreign Affairs Cabinet Secretary Amina Mohamed visited the embassy on Wednesday for a briefing on the preparations for Obama’s visit and that of Secretary of State John Kerry next Monday.

SECRET SERVICE It will be the first time Obama is visiting Kenya as a president. Obama will also attend the 2015 Global Entrepreneurship Summit scheduled to take place in Nairobi. Advance teams drawn from the Secret Service have been visiting Kenya.

“The teams have been coming in groups to prepare for the July meeting and that of Kerry next week,” said a highly placed source who asked not to be named. Kerry is expected in the country on May 4 for two days and those with information on the trip say discussions on how to stop Al-Shabaab financing will be part of his agenda.

The five-member team from Capitol Hill was on a three-day visit to understand Kenya’s security situation and the war against terror. It is not clear if First Lady Michelle Obama and their two daughters will accompany the US President. It is also not clear what places he will visit in Kenya or if he will travel to Siaya. Obama will arrive in Kenya aboard Air Force One, the presidential jumbo jet, one of the most luxurious aeroplanes in the world.

There will be choppers on standby at the airport as he arrives on the customised plane. On arrival, the US President will ride in The Beast, his custom-made limousine, that is easily the safest road vehicle on the planet. Security is expected to be tight during Obama’s visit, especially due to the terror threats in the region.