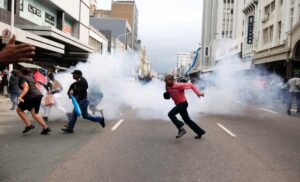 People run for cover from a stun grenade and tear gas after a skirmish between locals and foreign nationals as thousands of people take part in the “peace march” against xenophobia in Durban, South Africa, on April 16, 2015 (AFP Photo/)[/caption] Johannesburg (AFP) – High unemployment and a failure to address growing inequality are to blame for a wave of anti-immigrant attacks in South Africa, say analysts.

“We believe that the cause of the xenophobic attacks is policy failure by the government,” said Mienke Mary Steytler, of the South African Institute of Race Relations. “High unemployment and inequality are not being tackled.”

The violence has left at least six dead and more than a thousand displaced since the beginning of the month, with attacks spreading from the east coast city of Durban to parts of the economic hub, Johannesburg.

“The root of this problem lies in our inability to bring about economic growth and decrease the inequality that plagues our nation,” said the main opposition Democratic Alliance’s leader in parliament Mmusi Maimane.

“It is the hopelessness that results from unemployment that drives drug use and criminality in these communities, and underlies xenophobic attacks.”

In January, foreign shopkeepers in and around the vast township of Soweto, south of Johannesburg, were forced to flee and six were killed as looters rampaged through the area.

And in 2008, 62 people were killed in xenophobic violence across the city’s townships.

The current outbreak has been largely blamed on a speech last month by King Goodwill Zwelethini, traditional leader of the Zulus, in which he blamed foreigners for South Africa’s high crime rate and said they must “take their bags and go” — to loud applause.

The king has since said his words were misinterpreted, but for some, Zwelithini simply articulated what many were feeling.

“It’s much easier to find a soft target to express your frustrations, whatever those frustrations are, and foreign nationals are the soft target that frustrated communities have chosen to pick on.”

Accused of flooding the country, foreigners in fact make up just one percent of the working population in KwaZulu-Natal province — where the latest violence began — and only four percent nationally, according to a study released last year by the Wits University-based Migrating for Work Research Consortium. 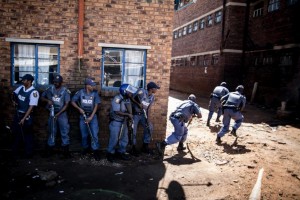 South African anti-riot policemen raid a hostel in Benoni, outside Johannesburg, on April 16, 2015, whose local residents have been protesting against the presence of Foreign-owned shops in the area (AFP Photo/Marco Longari)[/caption]

The researchers also found foreign workers were more likely to take jobs South Africans are not willing to do, or to start their own business: 21 percent were self-employed, 11 percent were employers.

In downtown Johannesburg earlier this week, as foreign traders closed shop and clustered anxiously on the sidewalk, South African Eveline Mangani elbowed her way in front of a camera and began loudly decrying the anti-immigrant sentiments.

“I’m very hurt by people saying they must be kicked out of the country, because I survive thanks to them,” she said.

“I get all my stock to resell from them. So I can put food on the table so that my five kids can survive. Now the shops are closed and look at my bag: it’s empty. I want the shops to open and I want them to be protected -– Somalis, Ghanaians, Ethiopians must be protected.”

The commercial success of foreigners running small general stores can be a sore point -– and a cause for envy, said Paul Ngema, provincial general secretary of the National African Chamber of Commerce and Industry (NAFCOC).

“When you look at people, they derive their income from running ‘spaza’ shops. Most of these foreigners, they come and also run the same small businesses -– and they happen to do it better than the local ones. You may call it perhaps jealousy.”

“Foreigners need to understand that they are here as a courtesy and our priority is to the people of this country first and foremost,” she was reported as saying at the time. “They cannot barricade themselves in and not share their practices with local business owners.”

But as the violence has continued the message from government has changed.

“Many (foreigners) are in the country legally and contribute to the economy and social development of the country. Many bring skills that are scarce that help us to develop the economy and are most welcome to live our country,” President Jacob Zuma said in parliament Thursday. *Source AFP/Yahoo]]>