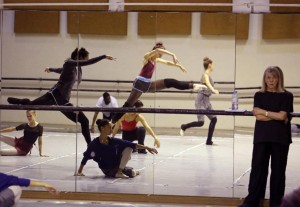 South African choreographer Veronica Paeper, right, watches dancers rehearse for the show “A Spartacus in Africa” in Cape Town, South Africa, Thursday, April 2, 2015. A new South African production of the ballet, “A Spartacus in Africa,” will incorporate African dance styles with classical and contemporary dance for a story that its producers say resonates on a continent with its own history of oppression. (AP Photo/Schalk van Zuydam)[/caption]

In the 1960 movie “Spartacus,” Kirk Douglas played the gladiator who led a slave revolt against the Romans. A ballet version with music by composer Aram Khachaturian was first staged in the 1950s and has also been a crowd favorite over the decades.

A new South African production of that ballet, titled “A Spartacus in Africa,” will feature Khachaturian’s music and will incorporate African dance styles with classical and contemporary dance for a story that its producers say resonates on a continent with its own history of oppression.

The sets and costumes of that earlier version followed the ancient Roman theme, while the production starting in June is inspired by West African dance, East African designs and other aspects capturing the continent’s diversity in a “mythical” setting, Paeper said.

The story features conflict between African tribes, according to its producers.

Brooklyn Mack, an American with The Washington Ballet, will play Spartacus in the cast of about 120.

“I love the story, and his tenacity and perseverance and bravery, and it’s just extremely powerful,” said Mack of Elgin, South Carolina.

Mack will alternate in the role with South African dancers Andile Ndlovu and Casey Swales. Marcus Licinius Crassus, the rebel’s Roman foe, is among other ballet characters.

The ballet opens at the Joburg Theatre in Johannesburg on June 4 before moving to the Artscape Opera House in Cape Town. Each city will host 12 performances with an orchestra.

Paeper said “A Spartacus in Africa” would be something different.

“I’m going to tread on a lot of toes and I’m quite prepared for that,” she said.