Summit to discuss the role of African capital markets in driving investment, growth and economic diversification 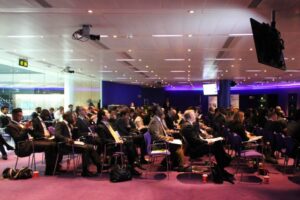 Finance Ministers from Cote d’Ivoire, Gabon and Nigeria are taking part in a Capital Markets Summit on the sidelines of the IMF/World Bank Spring meetings in Washington DC, USA. They join the Ugandan Central Bank Governor, Prof. Emmanuel Tumusiime-Mutebile, as well as investment bankers and lawyers to discuss the latest developments in Africa’s debt and capital markets. Emerging market sovereign debt has attracted global interest over the past 5 years, especially as yields in the West have been low, and right now investors are paying governments to lend them money. Discussions at the meeting will be centred around whether this debt accumulation is manageable and what policy makers can do to accelerate reform in order to enable deeper capital markets and more cross border capital flows. The meeting is organised by African Banker magazine, part of the IC Publications group, which is one of Africa’s leading media and communications groups. It the first time that the Summit is taking place in Washington DC. Historically it took place in June, following the African Development Bank meetings. Speaking ahead of the summit, group publisher at IC Publications and Managing Director of IC Events, the live events arm of the business, Omar Ben Yedder said that the focus of ADCM5 will be on the emergence of world class financial hubs in Africa. African capital markets, he said, have a clear and critical role in increasingly driving investment, growth and economic diversification. There needs to be an avenue for small and medium sized businesses to raise capital and the capital markets should be there for them, he added. The summit is sponsored by Standard Bank. Speaking ahead of the meeting, Megan McDonald, Head of Debt Primary Markets at Standard Bank highlighted how the total volume of Eurobonds Africa issuance in 2014 had exceeded that of 2013, stating that this now stands at slightly over US$15billion dollars. “In general” she said, “I think you can say that the capital that has been raised by Eurobond issuances has been well used in Africa. One of the benefits of any issuer accessing the Eurobond market is that it increases the scrutiny and focus from a global investor audience in terms of government procedures, reporting and information disclosure, which imposes a discipline on the issuer to ensure that the funds are used appropriately.” In addition to providing a deep analysis of local currency markets, attendees will have an opportunity to hear the views of investors, and speakers will be able to share and hear insights and case-studies from African Markets. As part of the Summit, Standard Bank will also host a Gala Dinner where the guest speaker will be the young African entrepreneur, Ashish Thakkar *Source AMA]]>