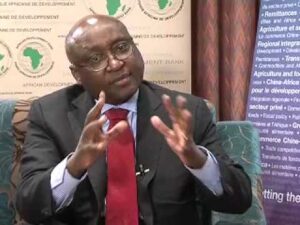 While the International Monetary Fund and World Bank announced this week that economic growth in Sub-Saharan Africa remains strong, the agencies predicted a second successive year of slowed growth for 2015. But that news does not change African Development Bank Group (AfDB) President Donald Kaberuka’s bullish view of the continent. If fact, he maintains Africa is still rising. “We are now in a place where it is possible to combine sound policies and private sector investment to provide a sweet spot for everyone,” Kaberuka told an audience packed inside the lecture hall at the Brookings Institute Wednesday morning. Kaberuka’s keynote speech centered on priorities for economic development in all African countries and he outlined how he positioned the AfDB is to help. He said he set the Bank’s focus on breaking down barriers to doing business in Africa, namely fighting infrastructure challenges. “We felt it was the biggest factor in the cost of doing business,” he said. Today, he added as an example, “every single African country has energy at the top of the agenda.”   Because of the size, diversity and depth of the continent, Kaberuka said another Bank priority is creating a single market. “Whether it is power integration, highways, shared services, harmonization of policies, or the free movement of people, we determined that for a continent as diverse as Africa, 54 countries, this is absolutely fundamental,” he said.   Vice-President and Director of the Brookings Global Economy and Development Program Kemal Derviş provided introductory remarks before Kaberuka delivered his address. Brookings Africa Growth Initiative Director and Senior Fellow Amadou Sy moderated the discussion, which included an opportunity for questions.   When asked about what can be done on the continent to respond to a crisis like Ebola, Kaberuka said the Bank is acting in two major ways. First, AfDB is helping to strengthening primary health care in Africa and, second, supporting the creation of an epidemiological centre of excellence on the continent. But, Kaberuka cautioned, there is a third area for improvement and that is the readiness of the global community to beat back the next epidemic. “Ebola was a reflection of a weak healthcare system and a failure of the international system to handle a big epidemic,” Kaberuka said. “It was a disaster.”   Kaberuka is completing his second term as President of the African Development Bank. During his tenure the Bank has become Africa’s premier financial institution, doubling bank loans and grants in the wake of the 2008 global financial crisis. Today, a large portion of the Bank’s portfolio is spent on infrastructure.   The Bank’s essential role is to help improve all sectors of African life and business and Kaberuka told his audience that while “money is important, money does not determine the outcome of development.” He said “what makes return on investment meaningful is the quality of policies.”   Kaberuka is in Washington, DC for the Annual World Bank/International Monetary Fund Spring meetings, which conclude on April 19. *Source AFDB.Contact Joel Kibazo]]>