Lokoja (Nigeria) (AFP) – An American woman kidnapped by masked gunmen in central Nigeria last month was released on Friday and handed over to US government officials, police told AFP.

Phyllis Sortor, a missionary with the Free Methodist Church, was seized on February 23 in the village of Emiworo in Kogi state. 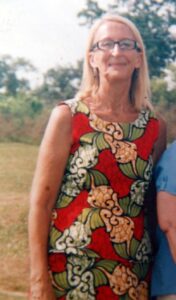 This undated photo shows American Phyllis Sortor, a missionary with the Free Methodist Church, who was kidnapped by gunmen in Emiworo village, Nigeria (AFP Photo/)[/caption]

“She has been rescued and given to the American authorities,” Kogi state police spokesman Collins Sola Adebayo said, adding that no ransom was paid “as far as police are concerned.”

An AFP journalist at the handover in the state capital Lokoja said the 71-year-old Sortor appeared unharmed with no visible signs of abuse.

Kogi’s police chief Adeyemi Ogunjemilusi said she was dropped by her captors in the bushlands outside the village of Eru and “raised an alarm which attracted the villagers.”

Police deployed to the area and brought Sortor to Lokoja.

Her church confirmed the release but declined to provide details on the circumstances.

“As a matter of sound policy, and to help protect the many, many people who helped secure Phyllis’ freedom, we will have no comment concerning the efforts that were undertaken to secure her release,” Bishop David Kendall said in a statement.

US embassy officials in Abuja were not immediately available to comment.

Sortor had spent years living in Africa, including Mozambique — where she spent much of her childhood — later working in Rwanda and, since 2005, Nigeria, Kendall said

Her work in Kogi was focused primarily on educational development and conflict resolution between nomadic herdsmen and farming communities who frequently clash in central Nigeria’s Middle Belt region, the church statement further said.

Foreign nationals have often been kidnapped in Nigeria by local gangs who typically release hostages following a ransom payment.

Such abductions are especially common in the southern, oil-producing Niger Delta, where expatriates working with large oil companies have been a frequent target.

A number of foreigners have also been kidnapped in the north of the country, but those attacks claimed by Boko Haram or the associated Islamist group Ansaru are considered a different phenomenon, and not necessarily motivated by a desire for ransom.

Boko Haram has been blamed for previous attacks in Kogi, including two raids targeting the same prison in 2012 and 2014.

Nigeria’s Islamists groups have in the past publicly claimed the abduction of expatriates and the lack of such a claim following Sortor’s kidnapping led many to believe that Boko Haram and its affiliates were not involved.