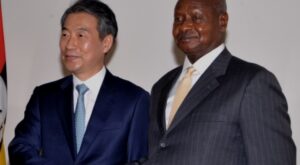 President Museveni with Hon. Chong Jong Sup at State House[/caption] President Yoweri Museveni has said that Uganda had all that it takes to be at the same development as the Republic of Korea. The President was today meeting Hon. Chong Jong Sup, the Korean Minister for Administration and Home Affairs at State House, Entebbe. President Museveni welcomed him to Uganda and said that he is impressed by how much Korea has achieved in the last 60years. He said Uganda could also achieve a lot only if the problem of Infrastructure is solved “Our government is trying to improve its human resource and we are also tackling the issue of infrastructure including roads, railway, electricity etc to fast track development.” He said development will be faster if people leave subsistence agriculture and go into commercial agriculture and then diversify into other sectors such as ICT, Industry and Services. “We are tackling the issue of Infrastructure and we are also seeking other markets in the region and over sees to boost trade,” he said. Hon. Chong is in Uganda to visit Korean funded National Farmers Leadership centre projects in Kampiringisa and Kitemu in Wakiso district. He said their projects encourage community self-help where the community is given inputs and guidance on how to work as a community to achieve more. “Korean people never sit on their hands. If there is something to do they have to do it.  Korea transitioned from the poorest country in the world to a donor country due to its dedicated public officials and good governance.” The meeting was attended by Amb Park Jong Dae of the Republic of Korea to Uganda. The Republic of Korea was selected as the most innovative country in the world by Bloomberg for the second consecutive year. A wide range of civil services, IT rural education, on line tax payment, procurement from bidding to payment, customs clearance, information system management are being carried out in an integrated and modernized manner in Korea using the facility of e-government. *Source Chimpreports]]>