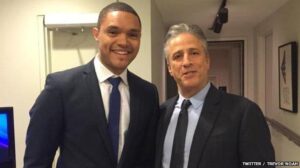 The 31-year-old made his debut as a contributor to the nightly satirical show last December. His first appearance took aim at racial tensions in the US, saying: “I never thought I’d be more afraid of police in America than in South Africa.” Stewart announced he would be stepping down in January. He has hosted the influential comedy show for 16 years. The presenter has yet to set a timetable for his departure, but the selection of a replacement should make the task easier. Producers will want to give Noah time to settle into this new role before next year’s Presidential election. Speaking to the New York Times from Dubai, where he is on tour, the comedian expressed disbelief at his appointment. “You don’t believe it for the first few hours,” he said. “You need a stiff drink, and then unfortunately you’re in a place where you can’t really get alcohol.” “I’m thrilled for the show and for Trevor,” said Stewart in a statement. “He’s a tremendous comic and talent that we’ve loved working with.” The star added he “may rejoin [The Daily Show] as a correspondent just to be a part of it!” Comedian Chris Rock, who had been touted as a possible replacement for Stewart, tweeted: “Thank you president Obama” Under Stewart’s guidance, The Daily Show has become one of the most important political programmes on US television. Even though he insists he is a comedian, not a journalist, Stewart’s passionate monologues on politics, race and social justice exert a real influence on political debate in the United States. “He essentially invented a new way to deliver the news that spoke to a younger generation less trusting of the traditional sources but still very interested in the world.” said Dan Pfeiffer, an adviser to President Barack Obama, when Stewart announced he was quitting. Massachusetts Senator Elizabeth Warren added: “Washington is rigged for the big guys – and no person has more consistently called them out for it than Jon Stewart. Good luck, Jon!” As well as Stewart, the Daily Show has also nurtured the careers of comedians such as Steve Carell, Stephen Colbert and John Oliver – all of whom started off a “reporters” in the show’s fake newsroom set-up.

Noah is a relative unknown in the States, but has hosted numerous television shows – including his own late night talk show – in his native country. It has garnered him an avid following on Twitter, where his two million followers will be aware of his ability to satirise the news without disengaging from the issues. One popular tweet, posted during Nelson Mandela’s memorial service in 2013, read: “People shouldn’t have booed Zuma at Mandela’s memorial. But it’s crazy that their anger supersedes their pain.” And after the 2012 Olympic Games, he quipped: “I’ll miss the Olympics. It’s the one time, when a group of black people can run, with no suspicion.” Noah was previously the subject of David Paul Meyer’s award-winning film You Laugh But It’s True, which documented his career in post-apartheid South Africa. The comedian has also appeared on UK panel shows including QI and 8 Out Of 10 Cats, as well as performing on the BBC’s Live From The Apollo programme. He also performed at last year’s Royal Variety Performance, where he spoke about his parents – a white Swiss man and a black Xhosa woman, whose relationship was illegal under apartheid laws. His mother was fined and jailed by the South African government – Noah joked that he was “born a crime” – and he grew up in a Soweto township. A TV career began when he landed a role on the soap opera Isidingo, aged 18, and he went on to host reality shows and radio programmes before becoming a stand-up. “Trevor Noah is an enormous talent,” said Michelle Ganeless, president of Comedy Central, which broadcasts the show. “He has an insightful and unique point of view, and most importantly, is wickedly funny. “He has a huge international following and is poised to explode here in America, and we are thrilled to have him join Comedy Central.” Writing on Twitter, Noah added: “No-one can replace Jon Stewart. But together with the amazing team at The Daily Show, we will continue to make this the best damn news show!” South African reaction: Milton Nkosi, Johannesburg South Africans are overjoyed at the news that their compatriot will succeed Jon Stewart on the Daily Show. It was even the lead story in some local news bulletins. The Soweto-born comedian is a much-loved figure here. In a polarised country like South Africa he cuts across racial divisions with his great sense of humour. The department of Arts and Culture told me it was great news. “No doubt this is a big development for Mr Noah’s career and a resounding statement that South Africa has the artistic talent of international stature and calibre,” said spokesman Sandile Memela. “We wish to congratulate him on this significant achievement.” *Source BBC]]>