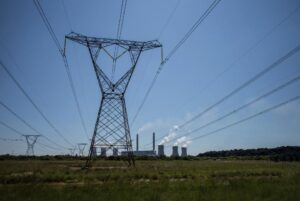 Johannesburg (AFP) – South Africa put its first new power station in 20 years on line Monday as the country grapples with rolling electricity cuts that have hobbled growth in the continent’s second-largest economy.

The state-owned Eskom power company said electricity from the first unit at the coal-fired Medupi power station will pump 794 megawatts into the strained national grid when it gets up to full power in three months time.

The station is expected to have a total output of 4,764 megawatts once all six units are finished in 2017, but the project has been repeatedly delayed since construction began in 2007.

Power cuts have been blamed for hampering growth, which slowed to 1.5 percent last year, as manufacturing was hit by the outages.

“This will contribute significantly to South Africa’s and the region’s economy in the long run,” Public Enterprises Minister Lynne Brown said in a statement.

South Africa’s Eskom, which accounts for 95 percent of electricity production, is looking at building 8 nuclear reactors worth up to $50 billion (45 billion euros) to add 9,600 megawatts of generating capacity.