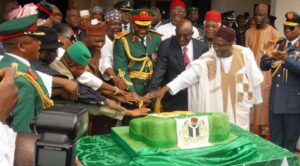 Jonathan in a file picture wearing military gear for the 52nd Independence Anniversary inside the Aso villa. Military victories over Boko Haram have dialed back acerbic criticisms but will this help his chances of re-election? Photo credit Daily Post[/caption] Senior Defence Officials of the Nigerian Government say the all out offensive launched against Boko Haram is yielding dividends, with the military securing much of the territory that was previously held by the sect. At an event at the Atlantic Council in Washington, DC to share updates on Security in Nigeria and the Campaign against Boko Haram on March 11, Ambassador Ayodele Oke, Director General of the National Intelligence Agency and Rear Admiral Gabriel E.Okoi,Chief of Defence Intelligence said the military had stepped up its fight and was on course to secure all portions of the country previously under Boko Haram before the March 28 elections. Defending the decision to postpone elections, the two officials indicated that it was not only about Boko Haram, but also about offering all Nigerians the opportunity to freely cast their vote. Holding elections in February would have meant disenfranchising millions of Nigerians in addition to putting the lives of election personnel in danger, the Nigerian Officials said. Nigerians have embarked on an irreversible path to democracy and all must be done to ensure that elections take place in a peaceful atmosphere with all Nigerians accorded the opportunity to freely cast their votes, said Ambassador Ayodele. In addition to the security gains that have been made, the Director General of the National Intelligence Agency disclosed that some additional ten million Nigerians have picked up voters cards and the electoral commission INEC had tested new equipment. All of these would not have been possible had the initial election date of February been maintained, he said. https://soundcloud.com/multimedia-podcast/nigerian-defence-intelligence-officials-on-security-in-nigeria-and-campaign-against-boko-haram   According to Rear Admiral Okoi, there is now better coordination with the neighboring countries of Cameroon, Chad, Nigeria, Benin and Niger which have now joined the fight after initial reluctance. Rear Admiral Okoi however lamented the slow pace with which intelligence was been shared especially with leading world powers which have the capacity to do so. When intelligence is shared late, instead of before for timely action, it makes things very hard for the military, said the Chief of Defence Intelligence. The two officials also lamented the fact that at its hour of need, the USA could not help Nigeria with procurement of necessary arms needed to effectively check the growth of Boko Haram.Although cooperation between the Nigeria and the USA had improved, the Nigerian Officials said there was a lot more that could be done to strengthen the hand of the military, protect civilians and ensure that investment interests are protected. [caption id="attachment_16975" align="alignright" width="225"] 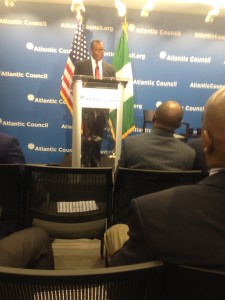 Ambassador Ayodele Oke,Director General of Nigerian National Intelligence Agency at the Atlantic Council[/caption] A certitude from the Nigerian Officials was that elections will take place as scheduled on March 28. The recent gains by the Nigerian have helped to restore credibility in the military and the Jonathan Administration which has been subjected to severe criticism as Boko Haram ran riot.From the 200 Chibok girls who are still to located, to tales and images of Nigerian soldiers fleeing from superior fire power from Boko Haram, and seemingly endless reports of attacks and territory falling into the hands of the Islamic sect, it has been tough time for the Nigerian government . With Boko Haram been pummeled by Chad,Cameroon and Niger, and the African Union bracing up to join the fray with its own forces, Boko Haram may in for a rough time. “Taking the fight to Boko Haram takes away a major talking point of the opposition APC ,”said Franklin Ekechukwu National Coordinator of the Diaspora Campaign Network who was at the Atlantic Council event. Ekechukwu who supports Jonathan said the Boko Haram atrocities masked all the positive things and progress that Nigerian has witnessed under the leadership of the incumbent President and flag bearer of the ruling PDP. Expressing confidence in the  military,Ekechukwu said victory for Jonathan at the March polls will only be a net plus for continued development and progress for all Nigerians .]]>