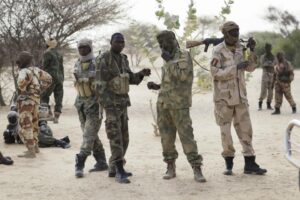 Chadian troops previously stationed by the Sudanese border make a stop on their way to lake Chad near Baga Sola Friday March 6, 2015. Large contingents of Chadian troops were seen heading to the region bordering Nigeria, where residents and an intelligence officer said Boko Haram fighters are massing at their headquarters in the northeast Nigerian town of Gwoza in preparation for a showdown with multinational forces. (AP Photo / Jerome Delay)[/caption]

MAIDUGURI, Nigeria (AP) — Boko Haram fighters are massing at their headquarters in the northeast Nigerian town of Gwoza in preparation for a showdown with multinational forces, residents and an intelligence officer said.

A woman trapped there since Gwoza was seized in July told her daughter that Islamic extremists are urging civilians to leave town to avoid being killed in crossfire in an anticipated major battle.

Hajiya Adama said her mother said the fighters also have released young women being held against their will, including some made pregnant during their captivity.

She said her mother left last week and escaped to the town of Yola, in neighboring Adamawa state.

“She told me that Boko Haram terrorists asked them to leave suddenly, that they were preparing grounds for a major battle,” Adama told The Associated Press. “She said while being helped by other women to leave through Madagali, they saw many Boko Haram terrorists in trucks and some on bikes moving toward Gwoza.”

An intelligence officer said security forces are moving slowly for fear of harming civilians, and especially since Boko Haram is surrounding Gwoza with land mines.

He confirmed forces from Chad are in the area, speaking on condition of anonymity because he is not authorized to speak to reporters.

Boko Haram in August declared an Islamic caliphate across a swath of northeast Nigeria where it held sway. In recent weeks, Chadian and Nigerian troops have retaken a score of towns. But the militants continue to kill scores in suicide bombings and village attacks.

Retaking Gwoza would be a major coup for Nigeria and for the campaign of President Goodluck Jonathan for re-election at critical March 28 ballots. Critics say the contest is too close to call between Jonathan, a southern Christian, and retired Gen. Muhammadu Buhari, a former military dictator who has vowed to stamp out the 6-year-old insurgency that has killed an estimated 12,000 people and left 1.6 million homeless.