Africa produces 9.9 million tonnes of fish a year and yet its share of global trade in this valuable commodity is just 4.9% [caption id="attachment_16780" align="alignleft" width="300"] 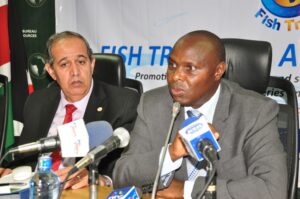 Mr. Felix Kosgey, Cabinet Secretary for Agriculture, Livestock and Fisheries, Kenya, officially addresses participants at the launch of the FishTrade for a Better Future programme[/caption] A new pan-African project has been launched to strengthen the continent’s great potential for increased trade in fish. Africa, a continent that is endowed with plentiful fish resources in oceans, rivers, lakes, floodplains and fish farms accounts for just 4.9% of global fish trade. More efficient trade could significantly improve income and nutrition for millions of Africans, particularly those 12.3 million that are directly employed in the fisheries and aquaculture sectors. Trade is constrained by inadequate market and trade infrastructure and poor policy implementation. High transport costs, complex and unaligned trade rules and poor market information also prevent Africa from optimizing the social and economic benefits available. ‘FishTrade for a Better Future’  funded project implemented by WorldFish , the New Partnership for Africa’s Development (NEPAD)  and the African Union Inter-African Bureau for Animal Resources (AU-IBAR)  will strengthen value chains and, with a focus on sustainability, give better access to intra-regional markets and subsequently improve food and nutritional security and income in sub-Saharan Africa. Stephen J Hall, Director General, WorldFish: “Africa has the potential to develop its fisheries and aquaculture to play a much greater role in promoting food security, providing livelihoods and supporting economic growth. Per capita consumption has fallen, despite Africa’s great abundance of aquatic resources. FishTrade will create the foundations for a more solid, productive and sustainable building-up of this great, continent-wide, resource.”   Hamady Diop, Programme Manager Fisheries and Aquaculture, NEPAD: “Recent years have seen increased growth in aquaculture. FishTrade will provide the opportunity to learn from past successes and failures and governments will be given the right information to be able to create the incentives and infrastructure that investors need to meet local demand and penetrate higher value-added export markets.”   Steve Wathome, Programme Manager, Agriculture and Rural Development Delegation of the European Union to Kenya, European Commission: “The EU is convinced that the Fish Trade programme will significantly contribute towards the fisheries sector in Africa. Trade has been identified as one of the major challenges affecting growth of the fish sector in Africa, with challenges being notable with regard to intra-Africa trade and accessing global markets.” Prof.  Ahmed El Sawalhy Director AU-IBAR: “Trade plays a major role in the fishery industry as a creator of employment, food supplier, income generator, and contributor to economic growth and development in several African countries. Domestic and intra-regional trade of fish (both marine and inland waters) is important with great potential for enhancing regional integration and food and nutrition security. However many AU Member States still face several constraints in improving their fish trade and marketing sector. This project will enable alignment of policies at the continental level and open-up fish trade that we believe will have a strong effect on the alleviation of poverty in some of our poorest regions.”   FishTrade will work in four ‘corridors’ to generate information on the structure, products and value of intra-regional fish trade and its contribution to food security in sub-Saharan Africa. Recommendations will be prepared on policies, fish certification guidelines and quality and safety standards, as well as regulations. A second stage will focus on strengthening the trade capacities of private sector associations, in particular of women fish processors, women traders and all aquaculture producers, in order for them to make better use of expanding trade opportunities through competitive small- and medium-scale enterprises. Finally Fish Trade for a Better Future will support adoption and implementation of appropriate policies, fish certification procedures, standards and regulations by key stakeholders in intra-regional trade.   The program will equip governments with the capacities needed to implement the African Union Policy Framework and Reform Strategy for Fisheries and Aquaculture in Africa. In addition, it has been designed to support the work of governments towards implementation of the Malabo Declaration on Accelerated Agricultural Growth And Transformation for Shared Prosperity And Improved Livelihoods FishTrade Facts:   •          Fish contains important micronutrients and omega-3 fatty acids that are particularly important in Africa where one in three children  are stunted as a result of poor nutrition. (Nearly 40%)   •          Fish accounts for just over one half  of sub-Saharan Africa’s protein intake but per-capita fish consumption has stagnated and is now under half the global average. (NOTE – The link suggests that fish provides 22% of the protein intake in sub-Saharan Africa’s, not 50%)   •          The continent produces 9.9 million tonnes of fish a year and yet its share of global trade in this valuable commodity is just 4.9%   •          In 2011, Africa became a net importer of fish.   •          Of the 9.9 million tonnes of fish produced in 2010, one third came from inland fisheries and1.49 million tonnes came from aquaculture (fish farming) . (NOTE: 1.28 million tonnes)   •          In 2011 the value of pan-African fish trade was US$24bn ,equivalent to 1.25% gross domestic product of all African countries.   •          The fisheries sector in Africa employs 12.3 million ; accounting for 2% of Africa’s population between 15 and 64 years old; and of whom 27% are women.   •          The cost of illegal and unregulated fishing in Africa is estimated to be over US$1bn a year .   *APO]]>