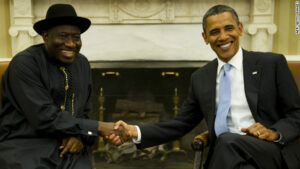 President Obama Meets With President Jonathan In US[/caption] U.S President Barack Obama is urging all Nigerian leaders and candidates to eschew violence as D-day approaches for crucial elections considered by analysts as too close to call. In a march 23rd message to Nigerians, President Obama describes Nigeria as a great nation which should be proud of the progress it has made from winning independence to turning its back on military rule, strengthening democratic institutions, working hard to improve the lot of its citizenry and building the largest economy in Africa. Nigeria now has the historic opportunity to write the next chapter of its progress with upcoming elections Obama said. Expressing the wish to see all Nigerians cast their votes without intimidation or fear, President Obama said “for elections to be credible, they must be free, fair and peaceful”. “I call on all leaders and candidates to make it clear to their supporters that violence has no place in democratic elections—and that they will not incite, support or engage in any kind of violence—before, during, or after the votes are counted,” said Obama. The US President expressed the believe that successful elections and democratic progress will help Nigeria to do better in tackling the urgent challenge of fending off the onslaught from the Islamic terrorist group Boko Haram. “Boko Haram wants to destroy Nigeria and all that you have worked to build. By casting your ballot, you can help secure your nation’s progress,” Obama said. Borrowing a Nigerian saying “to keep Nigeria one is a task that must be done,” President Obama called on Nigerians from all religions, ethnic groups and regions to come together and keep Nigeria one . Obama ended his message with a pledge of partnership and support from the USA as Nigeria continues with the task of advancing security, prosperity and human rights for all its citizens. https://www.youtube.com/watch?feature=player_embedded&v=zxk9mxURChw   The keenly fought elections between incumbent President Goodluck Jonathan of the Peoples Progressive Party-PDP, and former military ruler General Mohamadu Buhari of the All Progressive Congress-APC, have drawn unprecedented attention from the USA. Prior to the postponement of the elections earlier billed for February 14, U.S Secretary of State John Kerry travelled to Nigeria where he met with the two frontrunners. [caption id="attachment_17065" align="alignright" width="280"] 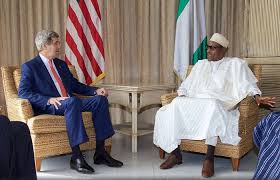 APC’s Buhari with US Sec of State John Kerry in Nigeria[/caption] Since the elections were postponed in other to secure parts of the country under Boko Haram, the Nigerian military has registered stunning victories over the Islamic terrorist group. At a recent event at the Atlantic Council in Washington DC, Senior Defence Intelligence Officials from Nigeria indicated that the country was better prepared for the elections today in terms of security and logistics than it was in February. The victories over Boko Haram have given incumbent President Goodluck Jonathan a chance in elections that many may have been in a haste to call for the APC’s Buhari.]]>