Nairobi (AFP) – A Chinese restaurant in the Kenyan capital Nairobi has been shut down and its owners summoned by authorities after it emerged it was barring black patrons, reports said Wednesday. 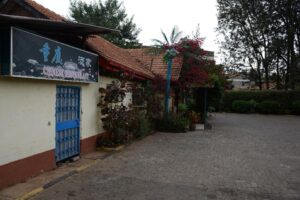 The Chinese restaurant in Nairobi that has been shut down and its owners summoned by authorities after it emerged it was barring black patrons, on March 25, 2015 (AFP Photo/Simon Maina)[/caption]

The restaurant became the focus of city authorities after furious residents took to social media to denounce an apparently racist policy of not allowing African patrons to eat there after 5pm — pushing #RacistRestaurant, #NoBlacksHere and #TheChineseInvasion to be top trending topics.

The owners of the restaurant said the measure had been put in place following a robbery in 2013, and have apologised for causing any offence, the Daily Nation reported.

But it said the Chongquing Chinese restaurant, situated in Nairobi’s bustling commercial and residential district of Kilimani, had been shut down anyway for not having the proper licences.

“We have established that the restaurant did not have the licences and I have ordered it closed until the management complies,” Nairobi governor Evans Kidero said in a statement.

“The owners of the restaurant have no change of user from residential to commercial which is a requirement to operate a business in Nairobi,” he said, adding the restaurant did not have a valid liquor licence and had failed to comply public health requirements on food handling.

“As of now the restaurant will remain closed until they comply with all set rules and regulations. We have deployed security officers around the premises.”

The governor also asserted that “all business and service providers must ensure that all customers and clients are treated with respect and dignity, irrespective of race, colour, sex, tribe and religion,” the Standard newspaper quoted him as saying.

Reports said the restaurant’s Chinese owners and managers had also been summoned by Kenya’s immigration authorities, while one Kenyan MP has also asked the Parliamentary Committee on Security to carry out its own investigation.

The Nation newspaper quoted a restaurant manager as saying the policy was aimed at keeping out thieves and members of Somalia’s Al-Qaeda-affliated Shebab militants, who in 2013 massacred at least 67 people in Nairobi’s Westgate shopping mall.

“We don’t admit Africans that we don’t know because you never know who is Al-Shebab and who isn’t,” restaurant relations manager Esther Zhao was quoted as saying.

“It is not like it is written on somebody’s face that they are a thug armed with a gun,” she said, adding the Chinese embassy in Nairobi had told Chinese businesses to be vigilant over the threat of attacks.

A city official however told the Star newspaper that the incident “has nothing to do with the friendship and diplomatic relations Kenya enjoys with China,” a major investor in east Africa’s biggest economy.

Although China’s relationship with Kenya and much of Africa is seen as being at an all-time high — notably with with huge investments in major infrastructure projects — ties have also been overshadowed by China’s massive demand for ivory, which wildlife campaigners say is decimating Africa’s elephants.