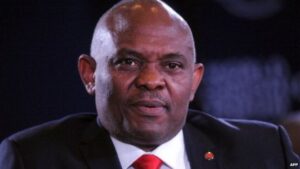 Nigerian billionaire Tony Elumelu has decided to fund 1,000 budding African entrepreneurs as part of a $100m (£670,000) initiative to boost the continent’s private sector.

Mr Elumelu said the entrepreneurs were Africa’s “hope for the future”. The 1,000 come from 52 African states and territories and were chosen from some 20,000 applicants. Forbes magazine listed Mr Elumelu last year as the 26th richest African, worth $1bn. The BBC’s Lerato Mbele reports from South Africa’s main city, Johannesburg, that his donation is the largest by a businessman towards the development of small businesses in Africa. “The selection of these 1,000 entrepreneurs brings us closer to our ultimate goal – to drive Africa’s economic and social transformation from within and to radically intensify job creation in Africa,” Mr Elumelu said in a statement. He plans to spend $100m to support 10,000 entrepreneurs over the next decade, and to create one million jobs through the initiative, the statement said. *BBC]]>