By Daniel Flynn and Bate Felix* 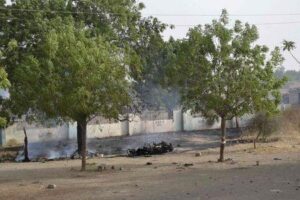 N’DJAMENA/YAOUNDE (Reuters) – When battle-hardened Chadian troops overran a Boko Haram camp in northern Nigeria last week, they wanted to press deep into territory controlled by the Islamist group but Nigeria refused to let them.

Having defeated al Qaeda in Mali two years ago, Chad’s military believes it could finish off Boko Haram alone. It has notched up victories that have pushed the Nigerian militants back from the Cameroonian border.

But with presidential elections this month, Nigeria is keen to press ahead with its own military campaign against Boko Haram, aiming to push it out of major towns before the March 28 ballot.

In a country proud to be a major African power, it would be an embarrassment to President Goodluck Jonathan as he seeks reelection for a smaller nation to tackle Nigeria’s security problems, diplomats say.

In their forward base in the town of Gambaru on the Nigeria-Cameroon border, Chadian soldiers displayed dozens of guns seized from Boko Haram and a burnt-out armored vehicle painted with black and white Arabic script.

“We turned back because Nigeria did not authorize us to go any further,” army spokesman Colonel Azem Bermandoa said.

Nigeria’s spokesman for operations in the northeast, Mike Omeri, said cooperation between Chadian and Nigerian forces has brought some major military successes and any issues would be resolved via existing command structures.

But the Chadians say there have been no joint operations between the two forces. Chad’s offer to join a Nigerian offensive to capture Baga, site of one of Boko Haram’s worst atrocities in January, was rebuffed, Bermandoa said.

Officials from Chad, Niger and Cameroon say lack of cooperation from Nigeria has for months hampered efforts to put together a regional taskforce against Boko Haram. Chad was compelled to take unilateral action in January, under a deal that allows it to pursue terrorists into Nigeria, after Boko Haram violence started to choke off imports to its economy.

With Niger and Cameroon deploying thousands of troops on their borders, blocking escape routes for Boko Haram, the tide may be turning. In what Nigeria has branded a sign of desperation, the Islamist group has carried out wave of suicide attacks and threatened to disrupt the election.

Francois Conradie, analyst with South African-based NKC Research, said that if the current offensive can be sustained, Boko Haram could quickly be driven out of the remaining towns it holds. It would, however, remain a deadly rural guerrilla force.

“All of this is good news for stability and will probably be to Mr Jonathan’s electoral advantage,” he said.

Many in Nigeria ask why it took so long to act. Boko Haram killed thousands last year and kidnapped many more in its six-year campaign for an Islamist emirate in Africa’s largest oil producer.

But in recent months, Muhammadu Buhari, a former military ruler who is running as the presidential candidate for the opposition All Progressives Congress (APC), has gained popularity with voters desperate for tough policies both on corruption and Boko Haram.

Amid pressure from the ruling People’s Democratic Party (PDP), Nigeria’s electoral commission announced a six week postponement to the Feb. 14 election, to allow the army to tackle the security situation in the northeast so voting could go ahead there.

Ernst Hogendoorn, Crisis Group’s Africa deputy program director, said the government appeared to have engineered the delay in the hope the APC would slip up or the military could boost Jonathan by defeating Boko Haram.

“Boko Haram has certainly suffered a strategic setback … Clearly this improves Goodluck Jonathan’s chances somewhat,” said Hogendoorn. “The question is do any of these forces have the ability to maintain this tempo, particularly the Chadians and to a lesser degree the Nigerians?”

With Chad already squeezed by a slump in the price of oil, its main export, the government says it can only sustain the offensive in Nigeria for a short time, diplomats say.

Buhari, however, has already criticized Jonathan for relying on Chad to push back Boko Haram, saying his government would tackle the problem alone. Many in the military and the government are keen to limit foreign involvement on Nigerian soil, diplomats say.

When Chadian forces last month entered the town of Dikwa, they were told to leave by Nigeria’s military, which said it was planning air strikes, Bermondoa said. 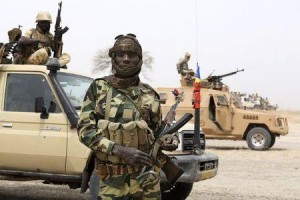 A Chadian soldier poses for a picture at the front line during battle against insurgent group Boko Haram in Gambaru, February 26, 2015. REUTERS/Emmanuel Braun[/caption]

After Nigeria’s army retook Baga last month, Army Chief Major General Kenneth Minimah said his soldiers would recapture a handful of remaining towns before the elections, listing Dikwa as one of them. “The war is almost ended,” he said.

Boko Haram was long regarded by neighboring countries as an internal Nigerian problem, but attacks in Cameroon and Niger last year prompted the regional response. Niger, Nigeria, Chad, Benin and Cameroon agreed in May to join forces against the militants.

Since then, however, distrust and misunderstandings have stymied preparations for the force, due to take effect by the end of this month. Nigeria initially sent low-level representatives to planning meetings, angering its allies.

Cooperation between Cameroon and Nigeria has been dogged by long-running border tensions, while Niger accused Nigerian troops of cowardice.

“Nigeria must get involved and honor its promise of providing between 2,500 and 3,000 to the multinational force,” said Cameroon’s defense spokesman Colonel Didier Badjeck.

Cameroon has stepped up its activities since July, when Boko Haram attacked Kolotafa, the hometown of its deputy prime minister, killing dozens and kidnapping his wife.

The government has boosted its security forces in northern Cameroon from 700 to around 7,000.

“We have to do whatever it takes to make sure the sect does not occupy any town in Cameroon,” said Colonel Joseph Nouma, in charge of Operation Alpha, the mission against Boko Haram.

However, Nouma said he has orders not to enter Nigeria, and Cameroon has denied Nigerian troops the right to pursue insurgents into Cameroon.

Another senior Cameroon military figure said they were attempting to choke off Boko Haram’s revenues, including the trade in fuel with Cameroon, Chad and Niger.

“All of this looks to be paying off,” the officer said, with no incursions since mid-February.