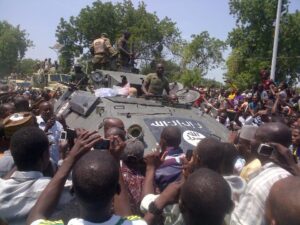 A would-be suicide bomber was shot and killed before he could ram his explosives-laden car into a military checkpoint in the town during the attack on Monday, witnesses said.

Around 150 Boko Haram fighters entered the fishing town with a large herd of cattle pretending to be ‎herders and opened fire on troops stationed in the town, leading to a six-hour gun battle.

“At the last count 73 Boko Haram gunmen were killed in the foiled attack,” a civilian vigilante, Butari Mala, told AFP.

“Among those killed was a suicide bomber who was shot inside his car loaded with explosives before he could reach his target,” he said.

“The rest fled into the bush but were pursued and bombarded by a fighter jet that deployed from Maiduguri.”

A military source in Maiduguri, who requested anonymity because he is not authorised to speak to the media, confirmed Mala’s account, including the death toll.

The attack happened at about 7:00 am (0600 GMT) and the gunmen abandoned the cattle as they approached a military post, said Konduga resident, Abba Kaka.

“Unknown to the Boko Haram gunmen herdsmen in Konduga had been asked to keep away from some designated no-go areas,” he added.

“So when the gunmen came in through these designated areas it was clear to soldiers they were not genuine herdsmen and they met the soldiers waiting for them,” Kaka said by telephone from Maiduguri.

Soldiers and vigilantes have repelled more than a dozen attacks by Boko Haram on Konduga, which is some 35 kilometres (21 miles) southeast of Maiduguri.

Troops and vigilantes have been stationed in Konduga to prevent it from being used as a launchpad to attack the Borno state capital, where the group was founded in 2002.

The latest defence of the town comes after a number of claimed Nigerian military successes, including the recapture of the town of Baga, on the shores of Lake Chad.

Soldiers, backed by armies from neighbouring countries have been involved in a fight-back against the militants, whose attacks have threatened regional security and upcoming elections in Nigeria.

The conflict has killed more than 13,000 people since 2009 and forced more than one million to flee their homes in northeast Nigeria.

Some one million people have been displaced within Nigeria and nearly 250,000 to surrounding countries, the United Nations Refugee Agency (UNCHR) said.

Some 16,000 Nigerians had fled to Cameroon’s Far North region, as a result of recent violence in border regions, it added in a statement on its website.

“Given the rapidly evolving security situation in the region and the prospect of new refugee influxes, we are discussing with authorities the feasibility of setting up a second refugee camp, further away from the insecure border,” said UNHCR senior emergency coordinator in Cameroon, Nasir Fernandez.

The displaced will likely take the total number of Nigerian refugees in Cameroon to nearly 66,000, Fernandez added.

In Niger, where there have been Boko Haram attacks in Bosso and Diffa, some 50,000 people have fled towards the city of Zinder and across the region.

The agency warned that access was difficult to the refugees, who were “in dire need” of food, water and shelter, because of landmines around the Lake Chad area, where Nigeria meets Niger, Chad and Cameroon.