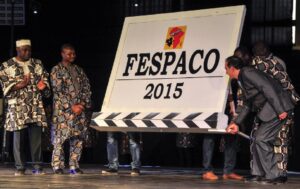 Ouagadougou (AFP) – Even in death, the former revolutionary leader of Burkina Faso, Thomas Sankara, helped inspire the uprising that ousted his successor last year, and he came to the fore again at the country’s annual film festival.

The audience at the 24th pan-African FESPACO in Ouagadougou, which wrapped up at the weekend, was moved to rowdy appreciation at the screening of “Captaine Thomas Sankara”, a flattering 90-minute portrait of the iconoclastic Marxist soldier by Swiss director Christophe Cupelin.

Sankara seized power on August 4, 1983 in then Upper Volta in a coup backed by many compatriots who shared his wish to stamp out corruption and bring sweeping social change to the former French colony.

Dubbed Africa’s “Che Guevara” by admirers, the new head of state, at age 33, soon changed the name of the deeply poor west African country to Burkina Faso, meaning “the land of upright men”, where he also campaigned strongly for women’s rights.

Sankara’s reputation spread far beyond Burkina’s landlocked borders because of his determined anti-imperialist outlook and a raft of measures to end dependency on foreign aid.

Known for strong statements during his speeches, the fiery leader urged the whole of Africa to halt debt repayments to developed nations. “If we pay, we’re the ones who are going to die,” he said at the rostrum of the Organisation of African Unity, today the African Union.

In addition to archive footage, Cupelin presents a range of statistics. Under Sankara’s rule, the number of children in school rose from six percent to 22 percent, two million youngsters were vaccinated in just two weeks, and a public housing programme got under way, while thousands of health clinics were built. The gross domestic product doubled.

When asked by a journalist towards the end of his life about rumours of a possible bid to oust him, Sankara was prescient. “The day you learn that Blaise (Compaore) is preparing something against me, don’t try to intervene, it will be too late,” he said.

And in the end, Sankara was overthrown on October 15, 1987, in a coup led by his longtime comrade-in-arms, Blaise Compaore, who in turn was ousted last October when he sought to prolong his 27-year rule.

Emotions have run high in Ouagadougou in the aftermath of the uprising against Compaore during which Sankara’s principles made a vocal comeback.

When the film was shown for the first time in Burkina at the grand Neerwaya cinema, with 3,000 seats, the audience noisily applauded each of Sankara’s lines and booed Compaore when he appeared on screen.

“Everywhere, the film has been greeted in the same fashion, very positive,” Cupelin told AFP. “Citizens of the world can identify with Sankara’s speeches.”

According to the director, in Argentina, which was ravaged by a military dictatorship from 1976 to 1983, the audience “stood as one and applauded” when they heard Sankara say, “A military man without political training is a criminal in the making.”

After seeing the film, self-proclaimed “pioneer of the revolution” Moussa Ouedraogo, 37, said he felt “very nostalgic and very proud… The struggle continues, we are holding the flame high.”

A French viewer of the film said it gave her a better understanding of why a popular uprising erupted against Compaore. “I understand better what’s going on, the impetus that the people want to give, or rather give back, to the country,” said Maria Gaschet.