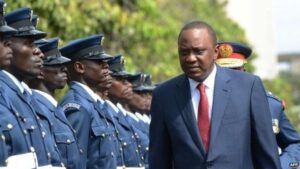 Kenyan President Uhuru Kenyatta has suspended four cabinet ministers and 12 other high-ranking officials after they were implicated in corrupt deals.

A fifth minister stepped aside earlier. The officials were mentioned in a report handed to parliament by the president this week. Some had defied the president’s order to step aside and allow investigations into corrupt dealings in ministries that include transport, energy, labour and agriculture. Those suspended were named earlier this week in a report by the country’s Ethics and Anti-Corruption Commission. President Kenyatta has given the commission 60 days to investigate the allegations levelled against the officials. The BBC’s Emmanuel Igunza in Nairobi says Kenya has long grappled with sleaze in government, blamed for the loss of millions of dollars each year. *Source BBC]]>