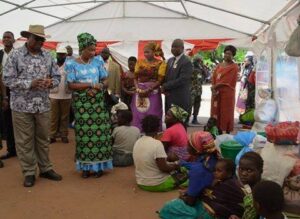 Malawi President Visiting a Flood Camp[/caption] The WHO Regional Office for Africa is intensifying country support to prevent cholera from reaching internally displaced person (IDP) camps along the border of Malawi and Mozambique. Since January 2015, extensive flooding has caused 230 000 IDPs to live in opportune refugee camps and temporary shelters. As of 2 March 2015, 55 cases of cholera have been confirmed by the Malawian Ministry of Health, with two deaths. All of these cases have been identified outside IDP sites. Several cases have been linked to the Jambawe area in Mutarara district – a gold mine in Mozambique 10 km from the Malawian border, where many Malawians work. “The WHO offices in Malawi and Mozambique are facilitating cross-border meetings for the Ministries of Health in the two countries to agree on a common approach to prevent the outbreak from spreading further,” said Dr Eugene Nyarko, WHO Representative for Malawi. “Here in Malawi the WHO, UNICEF, Medicines Sans Frontier, Save the Children Fund and the Malawi Red Cross have mobilized and prepositioned cholera kits in all cholera prone districts. Health promotion and Water Sanitation and Hygiene (WASH) interventions are being intensified through the district health management teams and the relevant partners at district level to prevent the disease reaching the camps,” Dr Nyarko added. The first case of cholera in Mozambique was notified on 25th December 2014 in Nampula city and has now affected over 3782 people with 39 deaths in 11 districts of four provinces. The most affected district is Tete followed by Nampula and Moatize. Cholera can kill within hours if left untreated and thrives in areas of overcrowding, scarcity of safe water, poor sanitation and waste management, poor nutritional status as a result of food shortages, and poor access to health care services. People with low immunity such as malnourished children or people living with HIV are at a greater risk of death if infected. The mainstay of control measures to be implemented during emergencies should remain (i) implementing interventions to improve water and sanitation, (ii) providing appropriate treatment to people with cholera and (iii) mobilizing communities to prevent transmission. Primary prevention is possible by observing a few simple rules of good hygiene and safe water and food preparation. These rules include thorough washing of hands with safe water and soap, especially before food preparation and eating, thorough cooking of food, and consumption while hot (“boil it, peel it or leave it”), boiling or treatment of drinking water, and use of sanitary facilities. Safe water is water that has been boiled, treated with a chlorine product, or is bottled with an unbroken seal. Promoting early detection and timely treatments Up to 80% of cases can be successfully treated with oral rehydration salts, and early detection and effective case management reduces the case fatality rate to less than 1%. Antibiotic therapy is also recommended for severe cases. The use of oral cholera vaccine is also being considered to prevent the spread of the outbreak to the IDP camps. If implemented, vaccination should cover as many people as possible who are eligible to receive the vaccine, and should be conducted as quickly as possible. Oral cholera vaccines (OCVs) can provide immediate, short-term protection while improved access to safe water and sanitation are put into place. Two doses of OCV given two weeks apart are required for fully protective immunity. The WHO Regional Office for Africa has sent experts to Malawi and Mozambique to provide technical advice and support to implement comprehensive control strategies, including OCV. *APO/WHO]]>