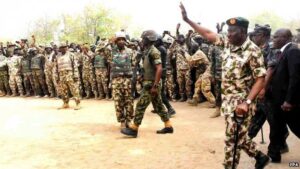 The Nigerian president is confident that the Islamist insurgents of Boko Haram are finally about to be decisively defeated.

In an interview with the BBC, President Goodluck Jonathan said Boko Haram will be routed in one month. His bullish comments follow the news this week that Nigerian troops had finally driven Boko Haram militants from Bama in Borno State, north-east Nigeria. Military spokesman Chris Olukolade said militants fled the city, which they had held since September last year, after days of ground skirmishes and aerial bombardments. General Olukolade said troops would continue to pursue the militants towards Nigeria’s porous border with Cameroon. Bama lies along a critical road connecting Cameroon to Maiduguri, the embattled north-eastern Nigerian capital and epicentre of the Islamists’ activities.

The troops’ advance to recapture the town started early this month but was slowed, largely because Boko Haram militants had destroyed bridges linking it to other communities.

The military had to spend time constructing a make-shift passage to the town. String of successes The victory over Bama came as part of a string of successes recorded by the Nigerian military in the last month, after struggling for years to contain the deadly jihadists. Bama was one of the two most important towns held by Boko Haram. The other is Gwoza, which is now the only big town under the control of the militants. It is believed Boko Haram uses Gwoza as its headquarters. It took the postponement of a general election earlier scheduled for the middle of February, for the Nigerian military to make progress. The army says that it has recaptured 11 of 14 districts from Boko Haram. But how did Nigeria turned the tide against Boko Haram in just four weeks? Key has been collaboration with neighbouring countries, mainly Chad, Niger and Cameroon, who have provided troops to help tackle the insurgents. New confidence [caption id="attachment_17048" align="alignright" width="300"] 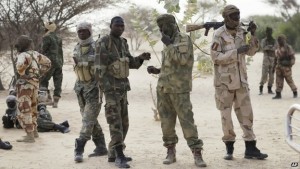 Chadian troops have joined the multi-national taskforce fighting Boko Haram[/caption] In addition, President Jonathan told the BBC his military has acquired new weapons sufficient to defeat Boko Haram. Nigeria has brought in extra equipment from the former Soviet Union and South Africa. Initial incursions into the Nigerian territories were made by the multi-national force supported by the African Union, which had massed in Cameroon. Led by Chad, they bombarded Boko Haram positions and killed more than 300 of them. Nigerian troops then moved in on the ground. The Nigerian government is eager to show progress in the fight against Boko Haram ahead of the general elections, the reason officials gave for postponing the polls in the first place. Government criticism It attracted scathing criticism after it failed to stop the jihadists, who had carried out bombings of towns, schools and company installations, killing over 20,000 people and displacing nearly two million others. The government has not explained how it failed to protect the lives 59 school boys who were slaughtered in their sleep by Boko Haram in Buni Yadi, Yobe state. Similarly, there has been no explanation for the failure to rescue more than 200 schoolgirls abducted from their school by Boko Haram militants in Chibok, Borno State nearly a year ago. Campaigners with the hashtag #BringBackOurGirls, keep agitating for their rescue, but they have largely been ignored. Last year, Nigerian defence officials were quoted as saying they had sighted the girls but would not want to use force to rescue them. That has subsequently been denied, and the spirits of the parents, who expected a sort of miracle after President Jonathan assured them the girls would be found, remain dampened. With elections imminent, the government appears to be racing against time to prove it has the capacity to deal with the intractable insecurity situation that has bedevilled the north-east, in order to get Nigerians to vote it back to power. But Boko Haram’s presence still looms large. New dimension Last week, the group pledged allegiance to the Islamic State (IS) operating in Iraqi and Syria. This seems to have introduced a new dimension to the anti-insurgency campaign. Although the military say it is not fazed by this, many Nigerians are worried.

Late last month, four suicide bombs in Maiduguri killed about 60 people, adding to the tally of some 20,000 people the group has killed in the past six years. The latest successes are expected to boost the chances of the ruling party holding on to power. However, it faces a formidable challenge from the opposition, whose candidate is former military ruler Gen Muhammadu Buhari.

And many want to know why the government allowed the insecurity to fester until a few weeks to polling day before it could muster the strength to fight.

There are also searching questions about whether the success achieved in the last four months can be sustained. With homes and livelihoods destroyed, displaced people are now primed to return to their devastated communities. But they are keen to know what support will be available to help them piece their lives together again. Some also fear they will be disenfranchised. The electoral laws in Nigeria say voters can only vote where they registered. This means that displaced people may not vote since they have been driven out of their towns and villages. Many of them are currently in internally displaced person camps. It is now the responsibility of the electoral commission to determine how this challenge is addressed and ensure that it does not affect the outcome of the general elections. *Source BBC]]>