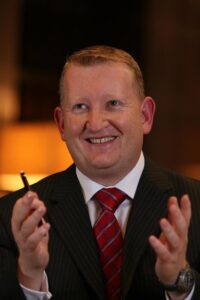 Patrick Fitzgibbon, senior vice president of development, Europe and Africa, for Hilton Worldwide[/caption] Hilton Worldwide, the world’s fastest growing hospitality company, today announced the signing of a franchise agreement with Africa Hospitality Investments to open the full-service DoubleTree by Hilton Kinshasa – The Stanley. Located in the bustling Capital of the Democratic Republic of Congo, the signing marks the arrival of Hilton Worldwide to one of Africa’s largest urban areas. Patrick Fitzgibbon, senior vice president of development, Europe and Africa, for Hilton Worldwide, said, “Our focus on developing our portfolio in key locations across Africa has resulted in Hilton Worldwide achieving the fastest growing pipeline of hotels on the continent . This latest agreement, marking our arrival in the DRC, will bring presence for us in this important location and further enhance the accommodation offering for travellers to Kinshasa.” With a population of over nine million people, Kinshasa is the third largest urban area in Africa and is located in close proximity to neighbouring Brazzaville, the Capital of the Republic of Congo. Following extensive refurbishment works, the hotel is expected to open in 2016, offering 96 guest rooms; as well as a business centre; three meeting rooms and fitness centre. In addition, the hotel will have three F&B outlets; including an all-day dining restaurant; café lounge and a rooftop restaurant. “We are excited to be introducing DoubleTree by Hilton to Kinshasa and look forward to welcoming guests with our warm service and signature chocolate chip cookie,” said, John Greenleaf, global head, DoubleTree by Hilton. “DoubleTree currently operates in Tanzania and South Africa and we look forward to further expanding our offering for travelers across Africa.” A conversion from its previous designation as the French Embassy, DoubleTree by Hilton Kinshasa – The Stanley will be located in Gombe, the city’s business district – allowing for easy access to corporate companies, retail outlets, government ministries, diplomatic and media organizations. The hotel will be approximately 25 kilometers from Kinshasa’s N’Djili International Airport. Safir-Ud-Dean-Hajee, Africa Hospitality Investments, commented, “We are delighted to be working with Hilton Worldwide to open this first DoubleTree by Hilton property in Kinshasa. We are confident that the hotel will offer world class standards in hospitality and look forward to beginning a long lasting relationship with Hilton Worldwide.” Hilton Worldwide currently has 37 hotels operating across Africa, with nearly 30 hotels under development.