Kinshasa (AFP) – Racism and the financial meltdown kept Congolese master chef Christian Yumbi down and out in Belgium. Back at home, the gourmet innovator has finally won the stardom he fought for. 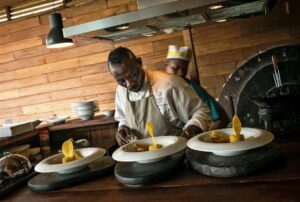 Chef Christian Yumbi has struggled against racism and the economic crisis in Belgium, but is finding the fame and fortune he hoped for back in DR Congo (AFP Photo/Federico Scoppa)[/caption]

“I did my best (in Belgium): I studied, opened my own business, married a Belgian woman, and spoke Flemish. But despite all that, I always felt like a foreigner there,” said Yumbi, who in 2014 won the pan-African television contest “Star Chef”.

Because he drove a flashy car, Yumbi said he was frequently stopped by the Belgian police, “who would ask me whether I was a football player or a drug dealer”.

Despite his masters degree from the prestigious Ritz Escoffier cooking school in Paris — which he financed by washing dishes — none of his Belgian employers ever appointed him a top chef.

“I was good, but it was practically impossible to become chef because I am black and African… Unsettled, frustrated and tired, I struggled to survive,” said Yumbi, 40.

Yumbi was inspired by the so-called slow food movement that aims to preserve traditional cuisine and steer clear from fast food.

“It was like going back to the source, that’s where the name ‘Re-Source’ came from,” he beamed.

Heartbroken by both the crisis-fuelled loss of clientele and the racism he kept facing, Yumbi finally gave up, packed his bags and went home.

Yumbi went home to his native city of Lubumbashi in southeastern DR Congo, but quickly found he would be better off moving to Kinshasa. 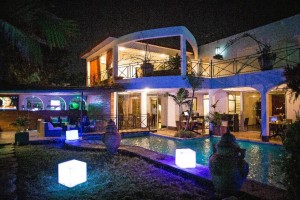 In a country where millions barely have anything to eat, the chef re-opened “Re-Source” in the upscale Gombe area, where most restaurants are owned by better-off expatriates.

Yumbi faces difficulties in DR Congo too: the rent is high, red tape is troublesome, and it is hard to find qualified employees.

But the chef says he appreciates “the good quality produce” he finds in the Congolese capital.

A Kinshasa farm supplies the restaurant with top-quality organic vegetables, including plump tomatoes, tasty aubergines, and mouth-watering cucumbers, while meat and fish are also bought from local distributors.

Dishes are exotic and not for the conservative palate. They range from mushroom soup to crocodile tournedos for starters, and goat smoked over a woodfire for mains.

The presentation is artful and colourful, marrying traditional Congolese tastes with European minimalism.

“What I care about the most is that my clients feel good,” Yumbi said, while he stood working in his kitchen, overlooking the little garden and indoor swimming pool at “Re-Source”.

“In our modern Congolese kitchen, each product maintains its original flavour,” the chef said, preparing a healthy, oil-free spinach dish.

A “Re-Source” regular told AFP Yumbi is not just a great cook, he is also a wonderful host.

The somewhat reserved chef “welcomes his guests himself, cooks and serves them”, says the client, who loves the fragrant little ginger doughnuts offered as entrees.

Looking back on his TV days, he said that in order to convince the jury of his qualities, he could leave nothing to chance.

He was meticulous with “the choice of products, their preparation, cooking and final presentation”, he said.

Yumbi won 10 million CFA francs (15,245 euros), which he invested in renovating his restaurant and setting up a school to train future chefs, which already has a dozen enthusiastic students.

Running a team of 20 food lovers at “Re-Source”, Yumbi says he feels “more fulfilled, more free in Congo” than he ever has anywhere else.