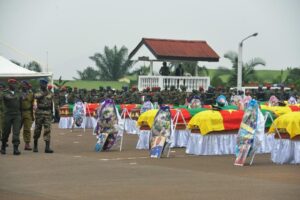 Cameroonian soldiers march around coffins during a ceremony for 38 soldiers who died in the north of the country while fighting Islamist Boko Haram militants, at the military headquarters in Yaounde on March 6, 2015 (AFP Photo/Reinnier Kaze)[/caption]

Yaoundé (AFP) – Cameroon honoured 38 soldiers on Friday killed in fighting with Boko Haram Islamists in recent months, with officials pledging the struggle against the militants will be won.

Coffins of the troops who died in clashes in the country’s far north were on display as their families and officials gathered to remember them.

“The head of state, commander in chief, commemorates with great sadness the memory of these soldiers who died defending their country,” Cameroon’s Defence Minister Edgar Alain Mebe Ngo’o said.

“The war against Boko Haram, will be won,” he said.

Boko Haram has expanded its insurgency from Nigeria in recent months, attacking border areas of neighbouring countries including Cameroon.

Cameroon deployed its army in the far north in August against the insurgents and over 60 of its soldiers have been killed since then.

In recent months the west African nation has held a series of ceremonies to remember its fallen troops, killed during roughly 20 attacks that took place between December and February in a range of Cameroonian towns on the Nigerian border such as Fotokol and Kolofata.

The youngest soldier was just 22 when he died. All the dead were awarded medals honouring them for bravery.

Army officials claim that thousands of Boko Haram fighters have been killed, but it is impossible to independently verify the figures. *Source AFP/Yahoo]]>