Ouagadougou (AFP) – Burkina Faso has begun an investigation into the 1987 assassination of former president Thomas Sankara, whose family has long called for a probe of his death, an official said Tuesday. 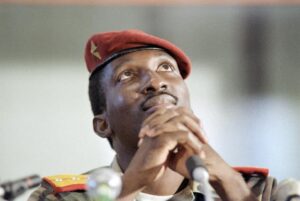 Sankara’s relatives have been told that the case of the popular Marxist revolutionary was being pursued by an investigating magistrate from a military tribunal, their lawyer Benewende Sankara, who is no relation, said Tuesday.

A high-ranking justice official confirmed the news on condition of anonymity, saying “the case has arrived, the order for the proceedings has been signed, an investigating magistrate has been appointed.”

The government ordered in March that Sankara’s body be exhumed in an effort to identify the remains of the late leader, slain in a putsch that saw his former friend and protege Blaise Compaore take power.

Sankara, one of Africa’s most idolised leaders, was buried in a cemetery in the east of the capital Ouagadougou but many of his family members doubt if the corpse is indeed his and have been asking for an investigation since 1997.

Compaore held power for 27 years, but stepped down on October 31, 2014, after angry mass rallies opposing a bid to amend the constitution to allow him to stay in power.

The new Burkina government headed by Michel Kafando promised to look into the questions over Sankara’s body.

“We went to congratulate the president for having kept his promise,” said Sankara, the lawyer.

A pan-Africanist revolutionary, Sankara transformed what was then the former French colony of Upper Volta into Burkina Faso, which means “Land of the Upright Men”. His spirit loomed large during the recent anti-Compaore protests.

Sankara’s legacy was formidable. In the four years under his rule, the schooling rate shot up from six percent to 22 percent, millions of children were vaccinated, and thousands of health centres were created.