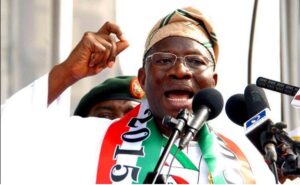 President Goodluck Jonathan speaking at the flag-off of his 2015 campaign in Lagos… on January 8, 2015. Photo Credit: State House[/caption] President Goodluck Jonathan has said that he believes the leader of the insurgent group, Boko Haram, Abubakar Shekau, responsible for thousands of deaths, will be apprehended by government forces before Nigeria’s elections starting March 28. Mr. Jonathan disclosed this in an interview with Thisday newspaper on Friday. ​”God willing we will catch Shekau before the elections,” Mr. Jonathan said in response to a question on what his government is doing about Mr. Shekau’s threat to disrupt the elections. Mr. Shekau, whose group has killed over 15,000 Nigerians, has remained elusive since the sect launched its series of deadly attacks in 2009. In September 2014, claims by the Nigerian military that Mr. Shekau had been killed during a shoot-out turned out to be a hoax. Efforts by the Nigerian government to improve the capacity of the army through arms procurement have been repeatedly frustrated by foreign authorities as claims of human rights abuses loom over the military. But government forces have made significant gains in the war against Boko Haram in the last two weeks, reclaiming some areas seized by the militants. Mr. Jonathan admitted that the strength of Nigeria’s military was not commensurate with its position as Africa’s largest economy, adding that his government is determined to look inwards for arms procurement. “Concerning the military strength being not at par to that of Nigeria’s economic development, there are some countries that don’t have powerful military,” Mr. Jonathan said. “I don’t think Switzerland has a very powerful military. There are some countries that were even doing away with their military until this issue of terror, and now some of them are reconsidering. “What happened in Nigeria is that after the civil war we had no reasons to buy sophisticated weapons. Since after the civil war, all what we have been doing is peace keeping, apart from stabilising Liberia and Sierra Leone, where our soldiers really fought war to stabilise those countries. “Back home, we were at peace with our neighbours. It is now that we are witnessing Boko Haram that we see that fighting them is not what we do with AK 47, and now we have to look for money. I totally agree with you, if Brazil can manufacture commercial helicopter, what stops us from going into manufacturing.” The president further said that if re-elected, his administration would focus on local technologies for arms production. “Recently, we wanted to buy tear-gas from a country and they were bragging and saying that Nigeria has human rights abuse issues. I kept wondering what is tear-gas? I vowed that God willing if I return, Nigeria must produce tear-gas,” he said. “What is the technology of producing tear-gas for God’s sake? What is the technology of producing APCs and armoured tanks? I agree with you that in terms of manufacturing, we must and we have no choice than to get into it as a nation. That is why we are emphasising about local content in production; that you can witness in the automobile industry which has come back.” Mr. Jonathan also said that more companies would be issued licenses to produce arms, to complement the Defence Industries Corporation of Nigeria, DICON. “Just last week a company that bought over the machine tools in Osogbo came to show the bullet proof vest that they produced and I asked them, can’t you produce weapons and they claimed that they can manufacture weapons if they could be patronised and there is a guarantor,” said the president. “Yes we have our own DICON, but DICON alone cannot produce all our weaponry. We must have more than two, three companies in a big country like Nigeria. “I told the company that immediately after the elections, if I’ll be here for the next four years, before they start going for weapons, all the tear-gas that we’ll use in Nigeria, will have to be produced in Nigeria.” *Source Premium Times]]>