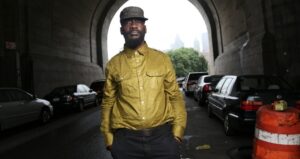 Andrew Dosunmu – Filmmaker. Photo©Chester Higgins Jr./The New York Times-Redux-Rea[/caption] The director talks to The Africa Report about the importance of images and silence in telling his stories. Nigerian-born and New York City-based filmmaker and photographer Andrew Dosunmu says that cinema has taken a turn for the worse in the past decade. Excessive amounts of dialogue have killed otherwise perfect stories.

“Things are often very over-reaching,” he says. “I really try to embrace the visual aspect of it because that transcends. People that don’t come from that culture or don’t understand that language don’t have to feel like they’re missing the translation, and that’s the kind of film I want to make.” His 2013 film Mother of George – the story of a Nigerian-American woman who reluctantly becomes pregnant by her-brother-in-law because her husband suffers from infertility – relies on visual devices. Long, silent scenes take in looks between characters, hand gestures and details of clothes. In some cases, the language spoken is not translated into English but the story remains potent for non-Nigerian audiences. “So much can be hidden behind dialogue,” says Dosunmu. “Being a photographer, that’s one of the benefits. That’s my strength.” Dosunmu started his career as a fashion photographer, a skill which translates into his films, which are imbued with the rich colours of African fabrics. In April and May, he had a 10-year photography retrospective in New York. His film Restless City, which was released in 2011, is a raw, unsentimental story of Senegalese immigrants in New York. Narratives about struggling immigrants and the beleaguered couple in Mother of George are “universal and specific,” says Dosunmu. “It’s very important that we have our own voice as filmmakers. What’s our story? What’s the style of films we make?” Dosunmu says he admires Nollywood film-makers for that very reason. “They have a voice. They have their own particular style. Like our literature, it’s universal but it’s specific. “As a filmmaker, that’s what it’s about: how do I create that universal subject from our perspective and specifically with our voice? “That’s what I’m in search of, what influences me, the way stories are told orally and how does one transcend that into a visual medium?” Dosunmu is working on a film about the musician Fela Kuti. “He was such an incredible character. He lived nine lives,” Dosunmu says. The film will portray “the spirit of the man” rather than present his life as a biopic. “I would love the finance to come from Nigeria. I think it’s really important that we start being a part of our own stories, beyond being in front of the camera, actually directing, producing and financing it.”
*Source theafricareport
]]>