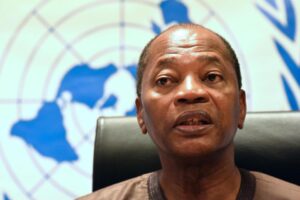 Representative of the Secretary General of the United Nations in West Africa, Mohamed Ibn Chambas, speaks during a press conference on January 15, 2015 in Dakar (AFP Photo/Seyllou Binani)[/caption]

Led by Chad, countries in the region are putting together an 8,700-strong force to battle the extremists, but Nigeria must also step up and show “robustness” in the campaign, Mohammed ibn Chambas said.

“They have to demonstrate greater resolve than has been the case so far in this fight against a serious enemy, Boko Haram,” Chambas told reporters via video link from Abuja.

“I think that we all expect more from the Nigerian military. We have seen it in other theaters where they have performed credibly.

“They have been contributing to peacekeeping around the world for years and demonstrated robustness. We want to see that same robustness in the fight against Boko Haram.”

The envoy’s remarks reflected widespread concern that Nigeria is failing to confront the threat from Boko Haram, allowing it to spill over to other countries in the region.

Boko Haram rebels on Friday carried out their first attack inside neighboring Chad.

Chambas held talks with President Goodluck Jonathan and former military ruler Muhammadu Buhari, who are running in the March 28 elections. The polls had been initially scheduled for February 14 but were pushed back due to security fears.

The envoy said the elections were “a bit of a distraction” and voiced hope that Nigeria and its army will rally after the vote to defeat Boko Haram.