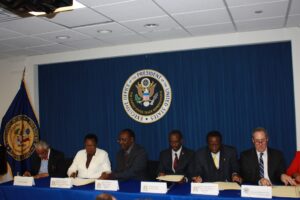 U.S. Trade Representative Michael Froman and trade ministers from the East African Community (EAC) marked a milestone for Trade Africa today; signing a Cooperation Agreement that will increase trade-related capacity in the region and deepen the economic ties between the United States and the EAC.

During the ceremony, Ambassador Froman announced that the United States will begin looking to expand Trade Africa beyond the EAC (Burundi, Kenya, Rwanda, Tanzania, and Uganda).

“Today’s agreement is an important milestone for deepening what has already proven itself to be a promising and impactful partnership,” said Ambassador Michael Froman. “This agreement will help us lift the burdens that trade barriers impose, unlocking opportunity on both our continents.”

The Trade Africa initiative was announced by President Obama during a visit to Africa in 2013, aimed at supporting greater U.S.-Africa trade and investment, beginning initially with the EAC.

Trade Africa has contributed to a number of successes in the region — notably, improvements at the ports of Mombasa and Dar es Salaam, construction of one-stop border posts in East Africa, and more effectively linking the U.S. and EAC private sectors under the U.S.-EAC Commercial Dialogue.

The Obama Administration is now looking to expand Trade Africa beyond the EAC, laying the foundation for a more mature and comprehensive 21st century U.S.-Africa trade and investment relationship over the medium to long term.

“We see this agreement and all our work with the EAC to date as an important steppingstone, not the final destination,” Ambassador Froman added. “The global economy is evolving and the U.S.-Africa economic relationship must evolve, too. Together, we can tackle more tasks, support more jobs, and unlock more opportunities for the American and African people alike.”

The Office of the USTR has also worked closely with the Commerce Department to ensure a strong and vibrant private sector voice to expanded U.S.-African trade.  Following the morning session, the Commerce Department will host the first U.S.-East Africa Commercial Dialogue, which will develop joint public-private sector initiatives to boost our trade and investment in the region by focusing on issues such as through customs modernization, electronic payments, cold chain development and access to capital, among others.

During a series of meetings following this signing, the U.S. and the EAC governments, private sector, and other stakeholders also discussed the strategic way forward for the U.S.-EAC trade and investment relationship, including the need for a seamless renewal of AGOA; discussed a regional strategy to help the EAC countries to take better advantage of AGOA; and held the inaugural meeting of the U.S.-EAC Commercial Dialogue with the U.S. and EAC private sectors.

The United States is committed to using all the tools at its disposal to help support greater African regional economic integration and U.S.-African trade and investment to help create jobs and opportunities for the American and African people alike.

The East Africa Community (EAC), comprised of Burundi, Kenya, Rwanda, Tanzania, and Uganda, is one of the leading regional economic organizations in sub-Saharan Africa and has made great strides in recent years toward integrating the economies of its partner states. It has established a free trade area and a customs union, and is working toward a common market.

The U.S.-EAC Cooperation Agreement on Trade Facilitation, SPS, and TBT commits both the EAC and the United States to three objectives: