DIEPSLOOT, South Africa (Reuters) – South Africa’s government has built close to 4 million houses for low-income families since the end of apartheid in 1994.

Lizzie Mboweni is one of millions still waiting for one. 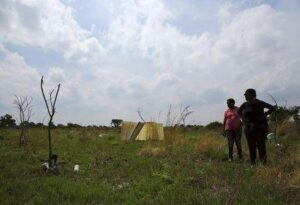 Residents stand in front of markings with sticks at an open land in Nellmapius township, 20 km (12 miles) east of Pretoria, November 13, 2014. REUTERS/Siphiwe Sibeko[/caption]

Last Saturday she joined scores of squatters from Diepsloot, a shantytown north of Johannesburg, in a violent attempt to grab plots in an unused field across the road, part of a campaign of land invasions launched by the Economic Freedom Fighters (EFF), an ultra-left opposition party.

The frustration of millions of impoverished black South Africans like Mboweni is not lost on the ruling African National Congress (ANC), which is resorting to brute force to thwart the invasions while signaling a populist shift to the left on land.

This includes proposals to ban foreign ownership of land and limit the size of farms.

Police firing rubber bullets drove Mboweni and the EFF back across the road, a small skirmish in the wider battle for the hearts, minds and ultimately votes of South Africa’s underclass.

“I think it is better to give the people land. It is squashed in here,” Mboweni told Reuters, pointing to the cramped and make-shift shacks of Diepsloot.

The local council says the field that was briefly invaded is owned by the province and has been ear-marked for housing.

Although most of the protests by the EFF, led by Julius Malema, the former head of the ANC’s youth wing, have been about urban housing, the party says it wants to expand it to farms.

These threats have sowed fears that South Africa may suffer a violent spate of invasions of white-owned farms that wrecked the economy in neighboring Zimbabwe 15 years ago.

ANC VEERS TO LEFT ON LAND

Land is an emotive issue in South Africa, where most of it remains in white hands despite ANC efforts at redistribution.

The EFF, which took 6 percent of the vote in general elections last year, wants to seize white-owned land, but the ANC has taken a more cautious approach under a ‘willing buyer-willing seller’ scheme.

Its most recent noises suggest that might be changing.

Last week, the party said it aimed “to accelerate the pace of land redistribution” by capping ownership at a maximum of 12,000 hectares or two farms and barring foreigners from owning land.

It has also floated a vague and poorly explained idea of forcing farmers to sell 50 percent of their land to workers because “the land must be shared amongst those who work it.”

Analysts dismiss it as populism and probably in violation of the post-apartheid constitution but investors, mindful of the chaotic land grabs in Zimbabwe, are unnerved.

“The ANC is trying to outdo the EFF on land issues. It’s a bluff,” said Gary van Staden, a political analyst with NKC Independent Economists.

Indeed, the ANC has floated such ideas before, often when it has come under pressure for past policy failures.

According to Edward Lahiff, an expert on South African land issues at University College Cork in Ireland, 8.2 million hectares have been transferred to black owners since apartheid, equal to 8-10 percent of the land in white hands in 1994.

The total is only a third of the 30 percent targeted by the ANC under its “willing buyer-willing seller” scheme and a parallel process of “land claims” by individuals or communities dispossessed under white rule.

But critics say many of the transferred farms have failed as new-comers have lacked the capital and skills needed to compete in South Africa’s sophisticated agricultural sector.

“The ANC proposals are grand-standing. The 50/50 proposal is a completely left-field suggestion,” Lahiff said. “It’s got no budget attached to it and it doesn’t seem to draw on any of the lessons regarding land reform of the last 20 years.”

The ANC was not available to comment *Source Reuters/Yahoo]]>