By Pontsho Pilane* A new app used to calculate lobola has has taken South Africa by storm, with many women (and men) using it to find out how much they are worth. PONTSHO PILANE tried it out. [caption id="attachment_16192" align="alignleft" width="200"] 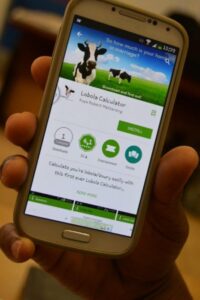 Try this Lobola Calculator to see how many cows you are worth[/caption] App developer Robert Matseneng has created a Lobola Calculator – an app that enables people to measure how many cows they are worth. The app attempts bring the old-age African tradition of lobola into today’s technology-driven world. Lobola, or magadi as it is called in my culture, is a longstanding tradition where a man pays a certain price for a woman’s hand in marriage. In earlier times, the price would be paid in the form of cattle, but these days money is a more practical way to pay lobola. Out of curiosity, I downloaded the app to see what this barometer being used to measure a women’s value in society was about. Among other things, the app examines a woman’s height, weight and how attractive she is (ranging from “really hot” to “not at all”), attributes I believe have nothing to do with how much lobola a man should pay. In practice, questions about her education and the number of children she has would also be taken into consideration by families involved once negotiations have started. According to the app, after factoring all of these in, my family could ask for lobola of R74,500 for me – the equivalent of nine real cows. My dad would be so happy. But in reality, this would be a ridiculous sum of money to ask for. A potential suitor would be around the same age as I am and would not likely be able to afford that kind of money. The affordability of lobola, and planning for life after the wedding, is a factor many families take into consideration before settling on an amount.

Matseneng should get kudos for having the app ask users to indicate whether they are male and female. This shows that the app is not specifically targeted at women. That being said, we cannot ignore the fact that this app is aimed at women more than it is at men. A Nigerian equivalent of the lobola app, Bride Price, was released last year. Bride Price uses a more specific barometer in calculating a woman’s worth; it considers her cooking abilities, complexion, whether she has tattoos, and whether she is “prayer warrior” or “club girl”. I have come to understand that lobola is not about buying a woman, but rather about integrating families before the wedding ceremony – in my culture, meeting the prospective groom and his parents usually only happens once talks of lobola have taken place (or when a couple falls pregnant outside of marriage). Bringing Mandla or Tshepo home for a weekend is highly frowned upon in my family, as it is in many other black families. Lobola is also about honouring the bride-to-be’s family. Although there are noble, cultural reasons for lobola that many people still want to hold onto, one cannot deny the patriarchal nature of the practice – a woman’s value is said to decrease depending on the number of children she has and, in some cases, whether she is a virgin or not. This criterion is never used on men. There is a hint of humour to apps like these (Matseneng says that “in all honesty it was all a joke”) but, considering that perceptions of morality and respectability are often used to police women’s behaviour, it is also disturbing. Who can forget the swimming instructor, Tim Osrin, who beat up a women who happened to be walking down the street, then justified his actions by saying he thought she was a sex worker (with the implication that sex workers invite and deserve assault), or the men who stripped and beat a young woman at a Johannesburg taxi rank simply because she dared to wear a mini skirt. *Source Allafrica/Daily Vox]]>