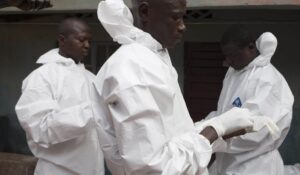 A burial team wearing protective clothing, prepare to enter the home a person suspected of having died of the Ebola virus, in Freetown September 28, 2014. Christopher Black/WHO/Handout via Reuters[/caption]

Nearly 40 percent of the funding pledged to help fight the Ebola epidemic has not made it to its destination, according to research published Tuesday in the British Medical Journal.

Nations and individuals have pledged a combined $2.89 billion to Ebola relief since the World Health Organization (WHO) declared the epidemic a “public health emergency of international concern” in August 2014. But as of December 31, 2014, only $1.09 billion of that $2.89 billion has been actually disbursed.

“Had the resources reached the countries in a timely fashion the epidemic would not have reached the scale it did,” says Karen Grépin, an assistant professor of global health policy at New York University and author on the study. “It’s unlikely it would have gotten so far.”

According to Grépin, it is not unusual for donors to make big pledges and not always see them through. But that only covers part of the gap. The bigger problem, Grépin says, is the lack of an adequate and efficient system for soliciting funds and then disbursing them. She says this has been a latent problem at the WHO for years, but the scale of the Ebola epidemic—and, accordingly, the scale of the need—caught the world off guard.

“This was a new situation for everyone,” Grépin says. “What I found was that donors were quite generous, but the problem was delays. It took a very, very long time for donors to engage. WHO was not calling on donors to make pledges until late in the game.”

Much of the funding that did make it to countries battling Ebola did not arrive until months after the outbreak had become dire, the paper notes. It took until “at least mid-October” for the first $500 million to arrive, and the first $1 billion didn’t show up until December.

Estimating how much money to ask for also proved difficult: In August, when WHO began appealing to donors, the organization estimated $490 million would be required to stop the outbreak. Roughly six weeks later, the United Nations’ Office for the Coordination of Humanitarian Affairs (OCHA) estimated $1 billion was needed. The latest estimate is $1.5 billion.

“Clearly, international leaders have found it challenging to estimate the financial requirements to tackle this rapidly spreading outbreak,” the paper reads.

“Now that the epidemic is dying down, people are looking away,” Grépin says. “If we don’t pay attention to this, we’ll be doing it again in a couple years.” *Source Newsweek]]>