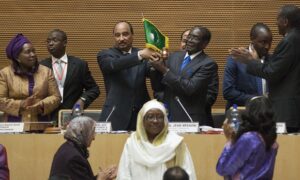 The Zimbabwean president Robert Mugabe has been sworn in as chairman of the African Union at a ceremony in Addis Ababa. Photograph: Zacharias Abubeker/AFP/Getty Images[/caption] Robert Mugabe, Zimbabwe’s 90-year-old president, has assumed the chairmanship of the African Union (AU) with a call for members to improve infrastructure and tackle climate change, conflict and Ebola, and with a familiar rallying cry that Africa’s wealth belongs to Africa and not “imperialists and colonialists”. The veteran leader, who was elected head of the union on Friday, replaces President Mohamed Ould Abdel Aziz, of Mauritania. “By electing me to preside over this august body, with full knowledge of the onerous responsibility that lies ahead, I humbly accept your collective decision,” Mugabe told the AU summit in Addis Ababa. “I do so, confident that I can always count on your full support and cooperation in the execution of the important mandate you have given me.” The president, who has led Zimbabwe since 1980, said the focus of his tenure would be on “issues of infrastructure, value addition and benefication, agriculture and climate change in the context of Africa’s development”. The continent’s underdeveloped roads, railways and air and sea networks, he said, were hampering efforts to improve trade, investment and tourism. “We need to continue – and perhaps redouble – our current collective efforts in this sector. “Given that the continent is rich in mineral resources – and resources should be seen to contribute more meaningfully to Africa’s development – they are our wealth and we must guard against their being exploited for the benefit of others.”

Similarly, he said, Africa’s “vast agricultural potential” had to be harnessed by ensuring that people had access to the land on which so many depend. Mugabe said his own government’s land reforms – intended, he suggested, precisely to take land from “colonisers” and give it back to Zimbabweans – had seen his country subjected to “practical demonisation … from those who had selfish and vested interests in our land”. Nevertheless, said Mugabe, production in the tobacco sector had now far surpassed levels attained by the white farmers who worked the land before they were expropriated. But such agricultural progress could not be taken for granted. “Since we are the most vulnerable as a continent, it is imperative that we actively champion our interests within the framework of the UN’s climate change negotiations.” Referring to the ongoing conflicts in Libya, South Sudan and Central African Republic – and the turmoil in eastern Democratic Republic of the Congo – Mugabe said the union needed to work harder to bring about sustainable peace on the continent. He also raised the “intolerable” atrocities perpertarted by Boko Haram. “The scourge of terrorism and all its attendant evils threatens all our gains achieved since 1963,” he said. “In the coming year we therefore should deliberate and find lasting solutions to the scourge of terrorism, the loss of innocent [life] and the destruction of property inflicted by terrorists recently in Cameroon and Nigeria.” Mugabe identified Ebola as another scourge. While he said he had been heartened to see that “a lot of ground has already been covered” in combating the epidemic, he stressed the disease still needed to be fought and eradicated. Characteristically, he could not resist gloating over recent oil reserve discoveries across the continent. “Oil. Oil. Oil – which the blind eyes of colonialists could not see!” he said. “God bless! It was the handiwork of the Almighty. We thank him for it. For sure, African resources should belong to Africa and to no one else except those we invite as friends. Friends we shall have, yes, but imperialists and colonialists no more. Africa is for Africans.” Despite the applause that greeted his words, the decision to appoint Mugabe as president of the AU was not universally popular within the ranks of the union. Although many Africans revere him as a hero of the liberation struggle, Mugabe’s autocratic style of rule and intolerance of dissent or opposition has left him increasingly isolated on the international stage. His use of political violence and intimidation has resulted in travel bans from the US and EU. “It’s not a very encouraging sign,” one African diplomat, who asked not to be identified, had told Agence France-Press in the runup to the announcement. “The Mugabe style belongs to a past generation, the one that takes power hostage, and this is no longer the AU creed.” Jeggan Grey-Johnson, a spokesman of the pan-African civil society coalition, the AU We Want, said Mugabe’s election would send “mixed signals and an extremely awkward message on international levels on how the AU stands on principles of democracy and good governance”. Others, however, have defended the move. “Who am I to say to the people, you have elected the wrong leader?” said Erastus Mwencha, deputy chairman of the AU commission. “The people have chosen: the important thing is that you must follow the constitution of your country.” Some diplomats attending the Addis summit have described Mugabe’s election as an “unfortunate accident” springing from the tradition of rotating the post between Africa’s regions. *Source theguardian
]]>