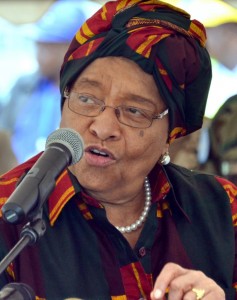 The White House said that Johnson Sirleaf — a rare female African leader who came to power in 2006 amid a wave of optimism — will meet US President Barack Obama at the White House to discuss Ebola response and the grueling task of economic recovery (AFP Photo/Zoom Dosso)[/caption] Washington (AFP) – The president of Ebola-ravaged Liberia will visit the White House on February 27, as her recovering nation embarks on an ambitious goal of reducing infections to zero.

The White House said Friday that President Ellen Johnson Sirleaf — a rare female African leader who came to power in 2006 — will meet US President Barack Obama at the White House to discuss Ebola response and the grueling task of economic recovery.

“President Sirleaf’s visit comes at a time of critical cooperation between the United States and Liberia,” Obama’s office said in a statement.

Of the West African nations afflicted by the deadly virus, Liberia, where 3,900 people died, is seen as the most advanced in curbing Ebola’s spread.

Earlier this month, schools in Liberia restarted lessons as Sirleaf vowed to eradicate the disease by mid-April.

Obama recently backed that goal and heralded a new phase in the fight against Ebola, one focused on extinguishing rather than containing the disease which has killed over 9,000 people.

Some 2,800 US troops deployed to the virus “hot zone,” predominantly in Liberia, are now being brought home.

“The United States is moving to the next phase of its Ebola response, which will be characterized by an intensive effort to reach zero Ebola cases in West Africa,” the White House said.

The Brookings Institution’s Amadou Sy said that while Sirleaf would want to thank Obama, issues like eradication, the development of a vaccine and economic reconstruction will be at the top of her mind.

“The economic impact of Ebola is large and it will take time for Liberia and other countries to put their economies back on track,” said Sy, a former International Monetary Fund official.

Around $2.5 billion has been allocated by the US government to help West African countries fight and recover from Ebola, he said, adding that the United States played a supportive role in securing IMF and World Bank support packages.