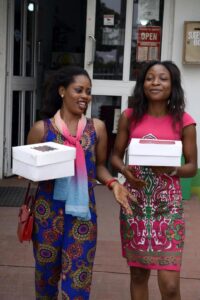 Residents in Africa’s most populous city had thought they would be deprived of one of their favourite festivals this year because of movement restrictions imposed for general elections.

But Valentine’s Day is now back with a vengeance after the presidential and parliamentary vote initially scheduled for this Saturday was pushed back to March 28 because of security concerns.

Tannaz Bahnam, who runs the “Lost In Lagos” restaurant and listings website, said it’s hard to underestimate the importance in Nigeria of the annual festival celebrating love and affection.

“It’s massive! Bigger than Christmas and New Year’s! People buy cakes and balloons and wear red. It’s as cheesy as it can get,” she told AFP.

– Campaigning to Cupid – Television presenter Tabia Princewill, who came back to Nigeria after studying abroad, said she has seen the phenomenon grow in size in the last five years.

Its popularity has gone hand-in-hand with the development of shopping centres and fast-food outlets, as well as the opening of a large number of trendy restaurants and bars.

“People go to the theatre, to the cinema, to restaurants on Valentine’s Day… Offering gifts to girlfriends on the day has become a custom,” she said.

“I was surprised when I first came here to see that it was so respected here,” added Bahnam, who comes from Iran.

“But then I realised that it was quite logical because actually love is quite important and central in Nigerian culture.”

In this election year, however, the romantic messages that normally fill the airwaves on radio stations have been dropped for political adverts and songs in praise of election candidates.

On the walls of the megacity, home to some 20 million people, thousands of political posters are stuck one on top of the other, leaving no space for sugar-sweet adverts declaring undying love.

But since the country’s electoral commission announced the controversial date change of polling, focus has shifted from campaigning to Cupid — which is just as well, said Bahnam.

“Restaurants were freaking out (at the initial polling date)… because they make so much money that night. Normally restaurants are fully booked days in advance,” she added.

Nigeria’s Independent National Electoral Commission (INEC) announced that the election would be delayed last Saturday because of fears that the military would not be able to provide security.

The delay is seen as giving INEC more time to distribute permanent voter cards to the 68.8 million registered voters.

“I will not stand and watch while Valentine is ruined for everyone,” the joke letter said.

Since last Saturday, restaurateurs have been going all out to book tables, with a publicity drive of seductive menus and romantic decor. 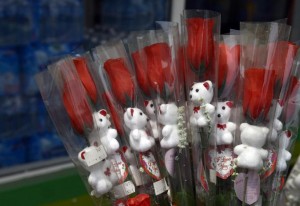 Valentine flowers are on sale at a Lagos supermarket on February 12, 2015 (AFP Photo/Pius Utomi Ekpei)[/caption]

“Now that the elections are postponed, our chef needs a couple of days in order to prepare something nice,” said Samson Oyedele, who works in the restaurant at the Federal Palace, a luxury hotel overlooking the Atlantic Ocean and Lagos docks.

“It’s a special day. People are willing to pay a lot… so we have to offer something nice. It’s always busy here for Valentines. It’s a whole day of non-stop activity.

“We are going to decorate the restaurant with glitter. It’s going to look very nice, I tell you.”

In all the trendy restaurants in Lagos, one thing is certain: the champagne will be flowing.

Bistrot 7, on Victoria Island popular with expats and richer Nigerians, said they were nearly fully booked for a four-course candlelit meal accompanied by a soothing romantic orchestra.

Lagos’ upper classes won’t be the only ones drinking to love on Saturday evening.

Fast-food chain Tantalizer, whose outlets are found in more working class areas, are offering their yearly special of a teddy bear and box of chocolates to customers.

Last year it offered a special menu with wine and ice cream for a more modest 4,000 naira.