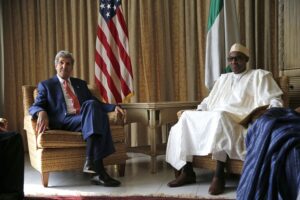 Photo by: Akintunde Akinleye
U.S Secretary of State John Kerry sits beside Muhammadu Buhari, Nigeria’s former military ruler and opposition party All Progressives Congress (APC) presidential candidate at the U.S. consulate house in Lagos, Nigeria, Sunday, Jan. 25, 2015. In a rare high-level visit to Africa’s most populous country, Mr. Kerry on Sunday urged Nigeria’s leading presidential candidates to refrain from fomenting violence after next month’s vote, and he condemned savage attacks by Boko Haram, an al Qaeda-linked insurgency. (AP Photo/Akintunde Akinleye, Pool)[/caption] There are several forces at play that make the new timeline for Nigerian elections a one-time chance for a decisive strike against Boko Haram. In addition to Boko Haram, Nigerian elections have a potential for violence themselves. With or without a domestic Islamist, insurgency a delay of elections is interpreted by the Muslim north and the All Progressive Congress party of presidential candidate Muhammadou Buhari as an extra-constitutional attempt to prolong power. That was one rational against the postponement of elections until the decision was made to do so on Saturday, a week before the scheduled elections. Apart from a rational, the calculus for Nigerian incumbent President Goodluck Ebele Jonathan might well have been to keep the election date, avoid the appearance of prolonging his term in office, and allow the disenfranchisement caused by Boko Haram to work in his favor. Such a scenario would allow for Candidate Buhari’s camp to reject the election results and resort to violence. Mr. Buhari was believed to be behind the 2011 violence in the north when a Muslim rejection of a southern Christian’s election led to more than 300 deaths and thousands displaced. With Boko Haram in the mix, the collective downsides over-shadowed appearances of good protocol by keeping the original date. The U.S. and the international community had urged as much. The presidential and parliamentary elections will now take place on March 28. Elections for governors and state legislators will take place on Feb. 28. Until now it has been ostensible that Mr. Jonathan had little interest in confronting Boko Haram and the international attention has put him in an awkward spotlight. If Mr. Jonathan’s administration fails to seize this window to take the reigns of the Nigerian military and significantly disable Boko Haram, it will confirm that he does not see himself as the president of all of Nigeria but only the south. The strength of former military dictator Buhari’s campaign is that his supporters believe he can achieve security and defeat Boko Haram where Mr.  Jonathan has failed. The political moment between now and the Feb. 28 regional elections is likely the last calm moment for Mr. Jonathan to galvanize against Boko Haram before Mr. Buhari’s political leverage reaches a critical mass. If Mr. Jonathan makes it through the elections without taking the upper hand against Boko Haram, he will face greater challenges with an even weaker mandate.

At such a crossroad, it’s important to have a good measure of who Mr. Buhari is. The fundamental political difference between Mr. Buhari’s group and those who would become Boko Haram back in 2000 was a factional split over who could best purify the Muslim north of political corruption and enforce the best interpretation of shariah law. In the year 2000, Mr. Buhari’s political colleagues were debating whether they could accept a moderate enforcement of shariah law in the North. “I can die for the cause of Islam. If necessary, we are prepared to fight another civil war. We cannot be blackmailed into killing Sharia” – Muhammadou Buhari, 2000 Freedom House.
Of course Mr. Buhari will play the role of a moderate now. Not enough eyelids were raised by U.. Secretary of State John Kerry’s visit so close to the election last month. It was then fair to speculate that Mr. Kerry was offering assurances of cooperation in exchange for assurances of a peaceful election. Despite the administration’s recent lectures on state visits near election time that concerned Bibi Netanyahu of Israel and Angela Merkel of German, the State Department played tone-def to the legitimacy and perceived U.S. approval given to Mr. Buhari in his meeting with Mr. Kerry. The public acknowledgement of the meeting in diplomatic currency was indeed a clear act of favoritism. Thanks to the reporting of Adam Kredo, we now know that it was something more nefarious. David Axelrod is Mr. Buhari’s lobbyist and in this administration you can buy the presidency of Africa’s most populous nation. According to the Washington Free Beacon report, Mr. Axelrod’s firm, AKPD, was employed by Mr. Buhari’s APC party as recently as December 2014. The timing of Mr. Kerry’s visit the next month within in that context puts a shorter lifespan on the Jonathan presidency. President Jonathan must now fight without firm footing against Boko Haram, his political opponents, U.S. diplomats and their lobbyists. He has about a month to make something happen.
*Source Washington Times.Nicholas Hanlon is Chief Africa Analyst at the Center for Security Policy.
]]>