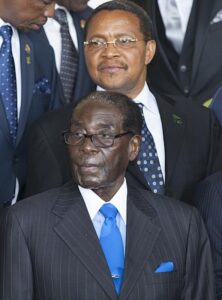 Robert Mugabe, president of Zimbabwe, is seen at the opening ceremony of the 24th Heads of State meeting at the African Union in Ethiopian capital Addis Ababa, on January 30, 2015 (AFP Photo/Zacharias Abubeker)[/caption] Addis Ababa (AFP) – Zimbabwean President Robert Mugabe on Saturday shrugged off concerns that his appointment as new African Union chairman would harm relations between the pan-African bloc and the West.

“What the West will say or do is not my business,” Mugabe told a news conference at the close of two-day African Union summit held in the Ethiopian capital Addis Ababa.

“My business is to ensure the decisions we take here are implemented. My concern is on uplifting the life of our people, giving them something that will raise their standard of living,” he said.

“For more that 10 years I have been under sanctions, my country has been sanctions. If they want to continue it’s up to them but these sanctions are wrong,” the president said.

Mugabe, a former liberation war hero who is Africa’s third-longest serving leader, is viewed with deep respect by many on the continent.

But he is also subject to travel bans from both the United States and European Union in protest over political violence and intimidation.

Last year Mugabe boycotted an EU-Africa Summit in Brussels after he was given a rare invitation — but his wife was still denied a visa.

Mugabe also spoke on his attitude towards the empowerment of women.

“We are different,” he told reporters. “There are certain things men can do and that women can’t do. And there are things women can do that men cannot do. You can’t bear babies in your tummy, can you? Even the gay ones cannot.”

“But what we have done in Zimbabwe is that our women can become ministers, judges, farmers, pilots. We have three pilots,” he added.