George Mel – The plane-builder of South Sudan has dreamed of flying since he was a boy, but when his father died he had to give up his studies, and any chance of training to be a pilot. Instead he built a plane in his back yard – which so impressed his country’s air force that it gave him a job. 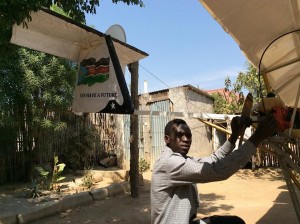 “I’ve had the passion to become an aeronautic engineer since I was young,” says George Mel, a 23-year-old, who lives in Juba, the capital of South Sudan.I love to make aircraft.” “When I was still young I tried to fly. I got curtains and put metal in to form wings, and got on top of the roof. I wanted to see if I would fly like a bird, but I fell. I almost broke my leg.” Despite such early disappointments, Mel set out to learn as much as he could about aviation. He went to study at high school in Uganda, but in 2011, as he was preparing for his final exams, his father died, leaving him unable to pay his tuition fees. He had no choice but to give up his studies and come home. But he continued to do whatever he could to teach himself aeronautics. Losing his father was bad, Mel says, but it also seemed to give him the space to pursue his goal. “When I didn’t go to school I had a lot of time,” he says.

“My brain was released to do a lot of research. I didn’t just sit down… I stuck to my dreams and I started doing them practically and researching a lot.”

He painstakingly gathered the materials to build an aircraft, scouring Juba’s metal workshops to piece together an aluminium airframe, and importing two small petrol engines to power it. Using a garden chair for the pilot’s seat, he put the aircraft together with information he found in old textbooks and on the internet. Mel’s “research centre” is his own room, where his bed sits alongside pieces of aircraft. “You can see wooden propellers here, and UAVs, because these were my interest, this is what I focused on. 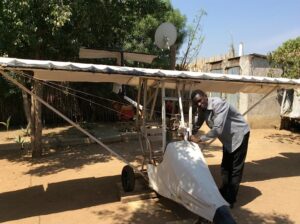 “This is where I sleep, and the same place where I do my research, because they don’t have any working places like hangars at the moment.” Occasionally, as the family bread-winner in one of Africa’s least developed economies, he has deemed it wise to conceal his activities from the rest of the household. “Sometimes when I bring materials I sneak them into the house through the fence so they will not see. If they see, they will start saying I’m wasting money on crazy stuff,” he says. But when Mel eventually took his work to the South Sudan Air Force, officers were impressed and gave him a job in their IT department. So far the authorities in Juba have refused Mel permission to test-fly his ultra-light, restricting him to taxi-ing the aircraft in his yard. But he remains determined to realise his ambitions, for himself and for the future of his country. “They came, saw my project, and promised to help me – but you know how the government is,” Mel said. “I asked them to test it, but they told me that, right now, they had seen what I had done but that they didn’t want to lose me because they didn’t trust the material I used,” added Mel. “They told me the engines may not be appropriate for flight testing.” “They prefer that I go for studies so that, in future, they will make something better than this. But me, I trust it; I believe I can take it and it can fly,” he insisted. He is now hoping to get a scholarship to study aeronautical engineering abroad. South Sudanese Air Force Commander Maj. Gen. Pakwany Kur, for one, recognizes the young man’s talent. “He is already with us; we are interested in his project,” Kur said, adding that discussions over Mel’s educational career were already underway. “I have already asked the Education Ministry undersecretary to write an official letter to us [saying] that the ministry has offered him a scholarship,” he said. “I advised him [Mel] to write a letter of commitment and, so long as there is a letter of commitment, we shall know where to take him,” said Kur. According to Education Ministry Undersecretary Bol Deng, steps are already being taken to further Mel’s education. 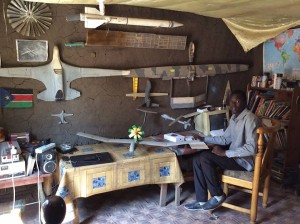 “We have already informed him to make contacts where aerospace studies are available and he has informed us of a university in Australia,” Deng stated. “We have also told him to supply us with his documents, which we began processing,” he added. “The most important thing is the tuition; we can inform the minister and then the money will be made available.” The undersecretary, however, said the government preferred that Mel studied in a country that has good relations with South Sudan, particularly in terms of education. “We could possibly send him to India, Pakistan or Egypt,” said Deng. “I have asked Air Force Commander Pakwany [Kur] to give us details of study programs in Egypt, where he has been. This is what we are still waiting for.” Mel, for his part, prefers to be given the chance to prove that his aircraft designs actually work. One of his aims is to develop a farming drone to spray crops, though in the long run, of course, he wants to design and build full-size planes. On the tail of his first aircraft he has painted the South Sudanese flag, along with the words: “We have a future”. “I’m very hopeful. What happened has happened and we have to move on with life,” says Mel. “So we forget about the past and struggle for the future. Mainly as the youth we need to do our level best and lift up this country. “It’s logic. The youth are the future of the country.” *Source My Africa Now/BBC]]>