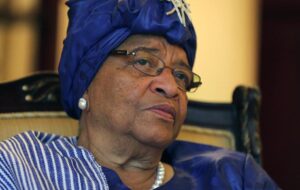 In an interview with The Associated Press, President Ellen Johnson Sirleaf said Liberia needs outside help to see through its “post-Ebola agenda” of building up basic public services — development that she said was needed to prevent another deadly epidemic from becoming “a global menace.”

Among the needs she highlighted were power projects to keep hospital equipment running, roads so the sick can access medical facilities, and clean water to prevent diseases from spreading.

“Our own limited resources have not enabled us to take them to the level where they could … be in a preventive mode. And that’s the support we want,” she said.

Deeply impoverished Liberia was one of the countries hardest hit in the West Africa Ebola outbreak that began last year and ranks as the largest in history. It has seen more than 9,000 confirmed, suspected and probable cases, and 3,900 deaths.

Liberia, founded in 1847 by freed American slaves, has long had close ties to the U.S.

Sirleaf was elected president in 2005 after years of civil war, and was re-elected to a final term six years later. She is in the United Arab Emirates city of Sharjah, near Dubai, to address the International Government Communication Forum.

She will travel to Washington later this week to meet with President Barack Obama to discuss the Ebola response and the region’s economic recovery.

Sirleaf acknowledged that her country could have been more aggressive in fighting the epidemic at the outset. But she also said she wished the U.S. and other developed countries, with their better resources and expertise, would have moved faster.

“We were slow. The world was slow. Everybody was fearful. It was an unknown enemy,” she said, adding that she was grateful for the international help — including 2,800 American troops deployed to the region — when it arrived.

That outside support helped bring the epidemic under control, allowing life to start returning to normal. Schools began re-opening last week, and Sirleaf on Friday ordered the lifting of an overnight curfew set up in August to try to contain the disease.

The president has also called for the country’s land border posts to be reopened. Officials on Sunday held a ceremony announcing that Liberia’s border with Sierra Leone was officially opened.

The disease has not been wiped out entirely, though.

Eight patients who have tested positive are still being cared for in Liberian treatment centers, and eight health care workers in the capital Monrovia are being kept under observation after they came in contact with a patient who tested positive.

Sirleaf cautioned that more must be done. That concern is echoed by experts who have warned that recent setbacks in neighboring Guinea and Sierra Leone could imperil the regional effort to fight the disease.

In Guinea, where the outbreak began, 52 new cases were reported in the latest World Health Organization update, and health workers continue to face security threats as they try to trace contacts, discourage unsafe burials and educate communities. Sierra Leone is recording the most cases, with 74 included in the latest WHO update.

“Now’s not the time to be complacent or to pull out or to … stop the support. Now’s the time to really intensify it so we put in those proper preventive measures to make sure there’s no recurrence,” Sirleaf said.

The U.S. is preparing to withdraw nearly all of the troops it deployed last year to help stem the spread of the Ebola outbreak. About 100 will remain to work with Liberia’s military, regional partners and American civilians.

Jeremy Konyndyk, director of the Office of U.S. Foreign Disaster Assistance at the U.S. Agency for International Development, said more than 10,000 civilian personnel from various countries will remain engaged in the fight against Ebola in West Africa long after the U.S. military pulls out. That figure includes members of non-governmental organizations working on Ebola and United Nations employees.

“The civilian capacity that is now in place is several times greater than the military capacity that was here,” he said in an interview during a visit to Monrovia. “We are planning to keep that capacity in place as much as it’s needed.”