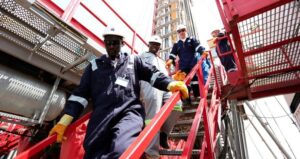 Photo©Billy K. Mutai/Nation Media Group[/caption] The International Energy Agency predicts that by 2040 sub-Saharan Africa will be producing more natural gas than Russia, with much of it coming from Tanzania and Mozambique. Kenya and Uganda are also preparing their own hydrocarbon booms, but much remains to be done in 2015 to speed up production and deliver benefits to local economies. The Kenyan government, which is begrudgingly devolving power to the county governments created through the 2010 constitution, plans to implement new legislation in the year ahead to shape the oil and gas industry. It could include a windfall tax, which companies say will scare away investment. The government nevertheless expects a flurry of exploration in 2015 as holders of 41 exploration licences enter the latter stages of their permits. The energy ministry estimates that proven reserves will soon rise above 1bn barrels. The development of the oil fields in the South Lokichar Basin, where there is an estimated 600m barrels, is part of the ambitious Lamu transport corridor project. Nairobi and Kampala are evaluating bids for the construction of a joint oil export pipeline. An announcement on Uganda’s plan for a refinery is expected soon after a decision on choosing contractors was postponed in 2014.

Mozambique and Uganda both plan to issue a round of new licences in early 2015. Developments in Tanzania are likely to be delayed by political wrangling. The country is due to hold national elections and a constitutional referendum in 2015. Meanwhile, two top directors of the Tanzania Petroleum Development Corporation were arrested in early November for their failure to publish the production-sharing contracts that the government had signed with oil and gas companies. The government has dragged its feet over creating gas policy and only set the meagre goal of training 300 people to work in the industry by 2020, suggesting that the gas boom will not lead to a concomitant boom in employment. While companies are deciding on whether to build liquefied natural gas plants in Tanzania and Mozambique, Tanzania is directing a portion of its gas reserves to the electricity sector. Norway’s Yara International began talks in 2014 on the possibility of setting up a gas-powered fertiliser plant in Tanzania or Mozambique. Uganda’s Kigumba Petroleum Institute, which became operational in 2010, has worked to overhaul its curriculum with the help of oil companies, and plans to graduate 160 students in the 2016/2017 academic year. The protests at Tullow’s blocks in Kenya in 2013 and the riots in Mtwara in Tanzania during the same year are reminders about the dangers of mismanaging the expectations that the prospects of oil and gas can bring.
*Source theafricareport
]]>