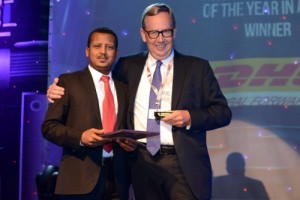 DHL – STAT Times International Freight Forwarder Award[/caption] DHL Global Forwarding , the air and ocean freight specialist within Deutsche Post, has scooped the award for Africa’s International Freight Forwarder of the Year for the 3rd time. The International Award for Excellence in Air Cargo was voted by STAT Times’ readers worldwide and given to DHL at the STAT Times Awards in Johannesburg on February 26. Roger Olsson, CEO, DHL Global Forwarding Sub Saharan Africa, who received the award, said: “DHL offers tailor-made solutions to businesses in Africa and it’s a service that’s second to none. It’s a tribute – to be named number one by STAT Time’s readers – to DHL’s strong African team that their dedication to excellence in international freight forwarding has been recognised yet again. DHL has been supporting the business in Africa for more than 35 years now but what’s most important is that we have continued to anticipate, adapt and create services that clearly meet Africa’s fast evolving business needs and help fulfill its vast potential.” According to the 2014 year-end report(1) by the International Air Transport Association (IATA), trade activity across the African region remained positive despite major economies Nigeria and South Africa underperforming for parts of 2014. Regional growth supported demand for air freight and capacity rose just 0.9% for the year as a whole, helping to strengthen load factors. African carriers’ freight tonne kilometers (FTKs) grew by 12.2% in December and 6.7% for the year as a whole. Globally, the air cargo business is growing again after several years of stagnation with demand growth up 4.5% compared to 2013 measured by freight FTKs.

As a global market leader, DHL Global Forwarding has been the leading service provider in the region’s air freight industry. With a focus on the Oil and Gas and the Mining sectors in the past few years, DHL’s freight management team has been very successful in developing customized solutions for customers in these sectors. DHL Global Forwarding also saw significant volume growth in Africa in both its regular and charter operations connecting all regions with Africa for the Oil and Gas and the Mining sectors. In addition, the India-Africa and China-Africa lanes are growing strongly, driven mainly by the life sciences, pharmaceutical and high tech sectors. Organized by STAT Times, the international multimodal transport media, the International Award for Excellence in Air Cargo was launched in 2006 to support excellence across different sectors of the air cargo industry during its biennial International Air Cargo events. Worldwide readers of STAT Times vote for the industry leader through an online poll, spanning a month. The award was presented to DHL at the Barnyard Theatre in Rivonia, South Africa, on February 26 as part of the AIR CARGO AFRICA 2015 event. *Source APO]]>